Using the barbell velocity to guide your training?

Whilst the use of velocity based “training zones” is still novel and yet to be proved the concept can be added on to a more traditionally planned strength training programme and used to guide weekly load selection.  For instance let’s use a planned 4 weeks cycle first written out as percentage based programme and then a programme using the velocity bandings to help guide load selection.

The addition of the bandings serves two purposes

What can you expect to see through day to day usage?

The first thing you will probably notice is that not all athletes lift at the same cadence some lifters can perform whole working sets at velocities that would indicate failure for another.  Here are some anecdotal observations from working with the gym aware  – 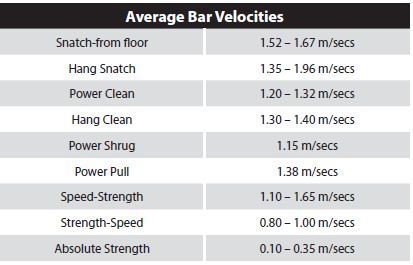 When we started using the gym aware at edinburgh we recorded every work set between 75 to 90% to look at what the velocity profiles of the different exercises looked like.  We recorded some 5-10 rep sets however since the vast majority of our programmes involve 2-5 rep sets for our main exercises we pooled the data by exercise and produced a bar chart looking at the mean velocity per rep. 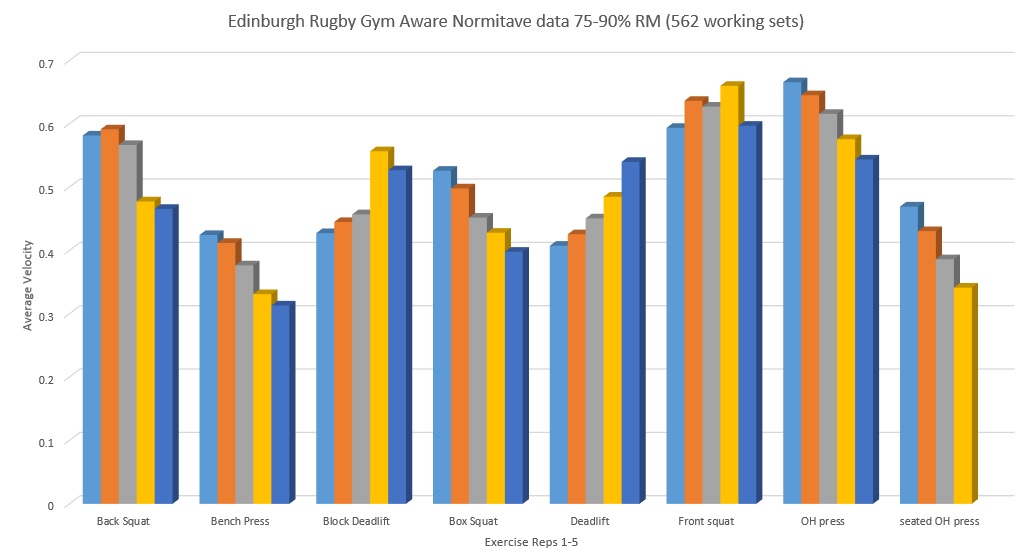 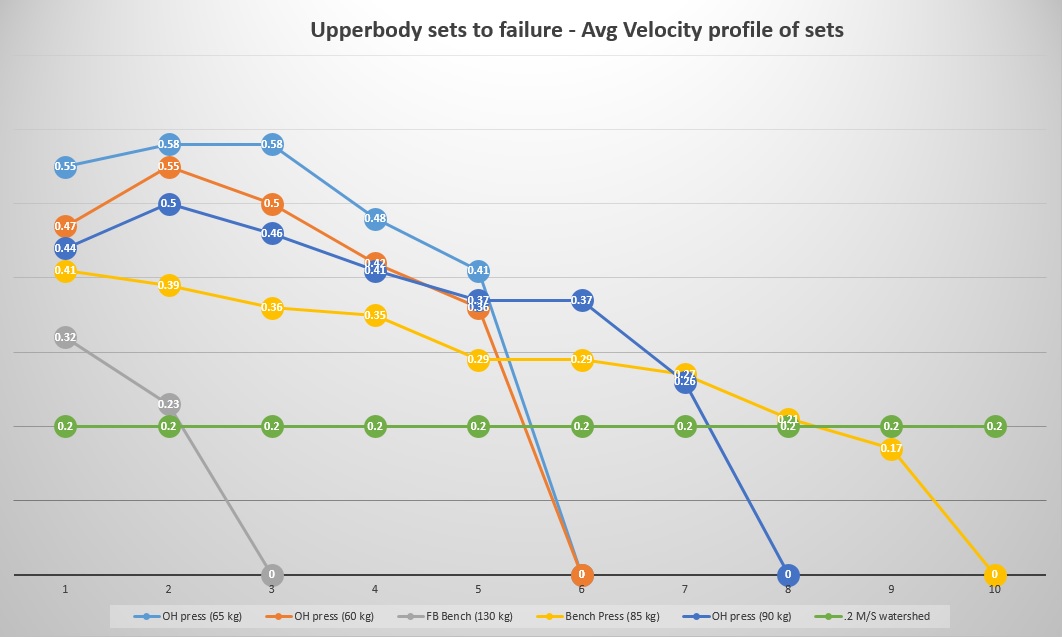 Based off the limited data we have on sets to failure it would appear that anything between .3 to .2 for an upper body lift would be coming close to the next 1 or 2 lifts being failure.  Whilst this is not of any concern (it’s even desirable) for a size programme for any strength or performance based programme it will induce huge amount of fatigue for little benefit.

Using the gym aware it could be possible and even pertinent to assign a volume of lifts (total number of lifts for that session) and allow the athlete to perform them in sets that don’t allow them to drop into the .3 m/s to .2 m/s zone.

That way you ensure the athlete is getting the stimulus in terms of volume of lifts completed which will ensure you are achieving the strength stimulus you require but they are not accruing as much fatigue as they might doing a set that reaches a near failure velocity.

24 reps done as 3 sets of 8 @ 75% run quite a good chance of accruing enough fatigue over the set that the athlete will likely come to a point where their bar speed drops to the point that the last reps of the set are likely to come under sub optimal technique and cause larger amounts of fatigue (with total body lifts such as squats this can also lead to spasm of the back from rounding).

24 reps done as 6 sets of 4 @ 75% will elicit much the same in terms of volume and strength gain however it is very easy especially with the gym aware to encourage the athlete to keep the concentric over a threshold.

As we have seen from the limited research same volume and intensity programmes have shown different results for 1RM and sports based measures with quicker velocity showing greater performance gains.  Therefore it could prove useful to try and use the same volume of lifts but encourage a higher mean velocity for all of the volume.

In the above example you have pretty much the same programme in terms of volume and intensity per week.  However with the velocity guided threshold version you get some additional benefits

Some thoughts on how to utilize in an athlete’s training.

Some thoughts on how to utilize in a lifters training.

Hope this 2 part series has given you some ideas on how you might implement this great training tool into your programme.