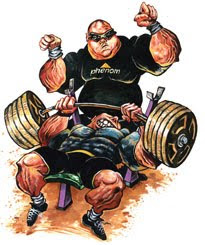 Taking my monthly browse of the Journal of Strength and Conditioning Research, I found a study that peaked my interest entitled – Using the load-velocity relationship for 1RM prediction. One of the main reasons it peaked my interest was due to it’s use of an experimental approach to try and derive a predictive equation with some real world application. These types of studies are few and far between but highly influential when they have any form of validity (RM % studies as a direct example).

Using 112 subjects for a collaboration of 3 previous studies the authors used a linear transducer to determine the velocity of a concentric only bench press performed using a smith machine 3 cm from the chest.
Using 3 or 4 increasing loads they plotted the velocity of the bar and used the drop off in speed with relation to the increase in load to try and predict 1 RM. 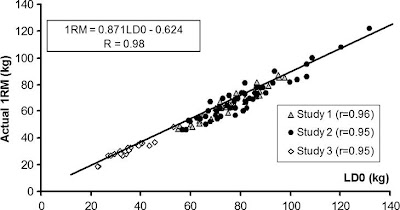 They found very strong co-relations in all three studies as shown in the above figure, this strong a relationship are few and far between and lends a lot of validity to this measurement. If a quick and easy protocol could be derived from this study that had a high percentage of accuracy it could greatly improve the ease of 1RM testing.
In this study the authors offer an accuracy with a 7% deviation, although not perfect does give a reasonable prediction of an athlete’s force capabilities and certainly one in line with rep to failure testing.
Some issues I would raise with this study –

These concerns aside this is a reasonably encouraging study that with a more efficient protocol could be used to quickly measure an athlete’s 1RM also the authors point out this protocol’s applicability to populations such as the elderly or children.