How Do Different Warm Up Intensities and Durations Effect 1RM Leg Press?

Renanto Barroso et al of the University of Sao Paulo Brazil looked at the effects of 4 different warm up condition vs a control condition on the 1RM leg press performance of 16 young healthy resistance trained males (age = 24.9 +/- 3.2, body mass 76.7 +/- 8.2).

The Warm up (performed on a cycle ergometer fancy talk for an exercise bike) conditions were :-

After performing the warm up condition the subjects then went on to perform a 1RM on the leg press the researchers found the following results. 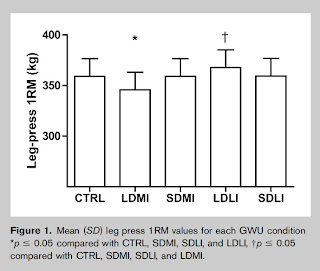 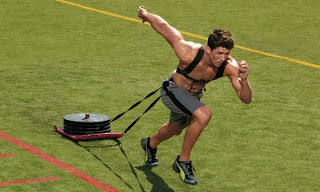 Resisted Sprint Training and Acceleration in Professional Rugby Union Players.
Daniel West et al of the University of Northumbria looked at the effect of weighted sled training combined with traditional sprint training vs traditional sprint training of the 10m and 30m sprint performance of 20 professional rugby union players.
The players were took base line 10m and 30m  sprint time measurements after engaging in a standardised warm up and then were randomly split into two training groups. 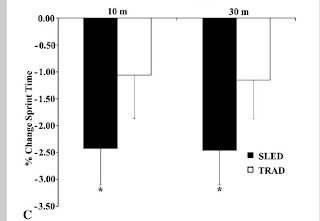 The Sled training group showed a significant improvement in their 10 and 30 meter times when compared to the traditional group.  Given the importance of 10 and 30 meter distances in team sports with an intermittent sprint component the addition of resisted sprint training could be an excellent addition to one of these athletes conditioning programme and a good/effective way of having a sport specific training outcome. 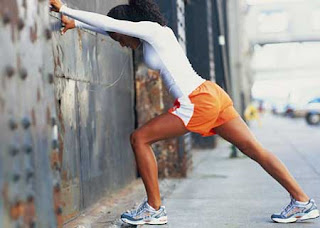 The effects of static stretching on muscular strength in healthy resistance trained men
Jeffrey C. Gergley of Austin State University looked at the effects of passive stretching vs an active warm up on the 1RM back squat performance of 17 healthy moderately strength trained men.  All subjects performed both of the warm protocols which consisted of :-

After the warm up was performed the subjects then engaged in a 1RM back squat task and after the last effort were asked to rate the balance/stability of the rep on a sale of 1 to 10.  The results of which are as follows. 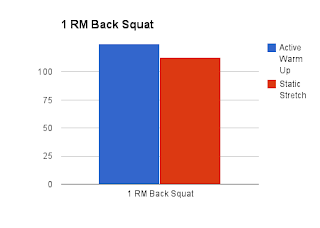 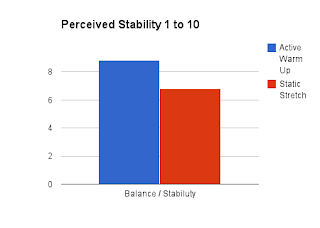 This study is a little better than previously looked at studies on the same subject as it uses an actually functional field measure namely back squat so we can see what it means for real world performance.  The Author suggests that if you are having problems achieving positions in an exercise you should perform an acute and intensive battery of flexibility after your session.
It has been my experience that the use of a dynamic barbell warm up and the inclusion of targeted foam rolling you can have a marked acute effect on position without the need for static stretching in a warm up.  A 10% decrease in performance is not to be sniffed at especially when training maximal capacities such as strength, power and speed. 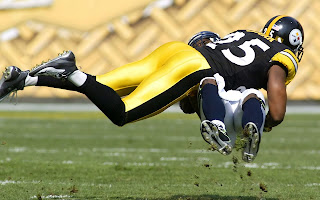 Changes of physical profile in Elite College American Football Players.
Daniel Robbins et al of the University of Louisville, Kentucky looked at the changes in the athletic performance of college players involved in the NFL draft process from the years 1999-2001 and 2008-2010.  In what proves to be a very data heavy articles the authors are to be commended in pooling together such a data rich experience as it would have proved very taxing and monotonous at times I am sure but provides a rare objective glimpse at the change in players over time the whole article is available freely on the NSCA website.
The gist of the results is that in almost every athletic measure used in every position players got better over time and the “athletic” qualities of the players coming through showed an upward trend over time here is the summation of all the results in table form.

To try and drill in on some of the results to provide a little room for discussion here are the collated position specific results for line backers.

Some things that jump out at you when you look at these statistics is the number of athletes involved an average of 50-60 athletes in 15 positions making a study population of roughly 825 elite athletes not bad!  Also the calibre of athletes 110 kg men with sub 5 second 40 yard times are few and far between.  The average of a 4 rep increase on the 225 bench press challenge is also a fun statistic but the fact that the profiles of the players involved (height / weight) stayed pretty much identical but they showed an improved athletic performance is encouraging as a practitioner as it shows me must on a whole be doing something right!
An interesting data set to browse especially if you are involved with the sport. 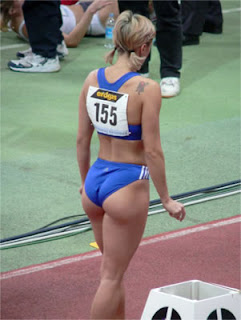 Counter movement jump in track and field athletes and co-relations to sprint performance.
Jonas Markstrom and Carl-Johan Olsson looked at elite sprinters, jumpers and throwers and their performance on a battery of jumping tasks (single leg drop jump, squat jump and counter movement jumps) to see if the jumpers, throwers and sprinters could be distinguished based on their performances in these tasks.  6 sprinters, 5 jumpers and 6 throwers took part in the experiment.
The authors failed show any significant difference between jumpers or sprinters based on the jump metrics measured.  They did show that sprinters performed significantly better on single leg variables than did throwers (this could be possibly due to the bilateral nature of a lot of throwing tasks and the almost exclusively unilateral plyometric nature of sprinting? interesting non the less).
One outcome the authors did find was that counter movement jump peak force was a significant predictor of 10m and 60m sprint performance.  They suggest that measuring these variables (using a force plate or failing that measuring jump height and inferring  and training to become better at them could be a good way of effecting sport specific performance for sprinters.  The authors mention that engaging in heavy resistance training and performing unloaded or lightly loaded jump being the best way to achieve this task.
That concludes this month’s look through see you in May!
Marc.
Previous Post
Next Post