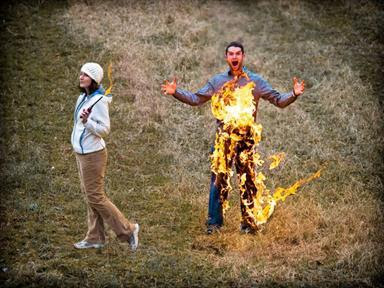 Quite a few authors have tackled the issue of differences between the physical performance of male and female athletes. Differences between fat free mass, relative strength and body fat percentage are usually put down to the fact that on average men have 10 times more testosterone than their feminine counterparts.

This should come of no surprise to anyone since testosterone is one of the most important anabolic hormones in the body. However a one look at an elite female strength athlete and the loads being shifted would give the average strength trained man pause for thought.

So as an exercise of interest I have decided to take a look at both women’s and men’s world records in both the sports of Powerlifting (IPF) and Weightlifting (IWF). I will try and quantify the differences between female and male strength athletes at the very highest level of competition.

Powerlifting is a limit strength sport and thus shall act as our measure of the ability for men and women to produce maximal force over relatively long periods of time (>0-1 second).

Powerlifting has a multitude of federations each with their own rules regarding equipment, lifting and testing. I have chosen the IPF since they are one of the largest (if not the largest) international federations and they also practice drug testing. 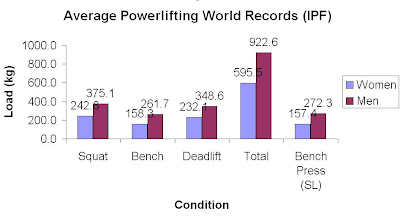 Gross average of world records between men and women.

When looking at the gross loads being used (absolute strength) men’s ability to produce maximal force and thus levels of limit strength are much greater than those exhibited in women. The wilks formula authored by Robert Wilks is designed to obviate for effects of bodyweight and sex on powerlifting performance so lifters can be compared on a level playing field. It has also been independtly verified by Vanderburg and Batterham (1999 – http://journals.lww.com/acsm-msse/Abstract/1999/12000/Validation_of_the_Wilks_powerlifting_formula.27.aspx) as a means of comparing performance. 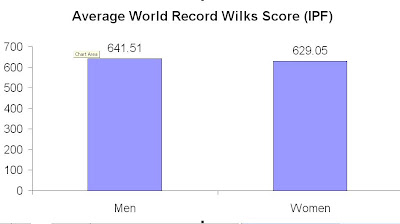 When wilks is used the difference in performance is nowhere near as apparent men score slightly better than their women counterparts however the highest wilks score of the lot belongs to a woman Yukako Fukushima of the 48 kg class.

As a measure of absolute strength it would appear that as expected men have a far greater capacity to develop it to higher levels. However when body mass and sex are obviated using the wilks formula the difference is not apparent.

Weightlifting is more a test of Power since the weights being handled are usually below the maximal force capabilities of the lifters (C+J 80% of BS and Snatch being 80% of Snatch – a standard for a lifter with good technique that gets banded about).

I chose to use the current standing world records since there exists records for both Men and Women. 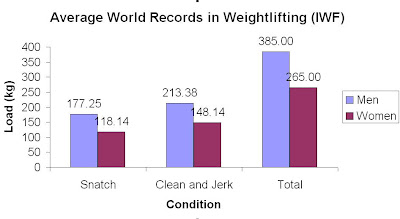 Again when you look at an average of gross performance men again out perform women in all conditions. The Sinclair formula is similar to the wilks formula in that it obviates for body mass.

The Sinclair coefficients, derived statistically, are adjusted each Olympic year and are based on the World Record Totals in the various bodyweight classes as of the previous several years.

were an athlete in the heaviest class of the same level of ability?” is given by the formula: 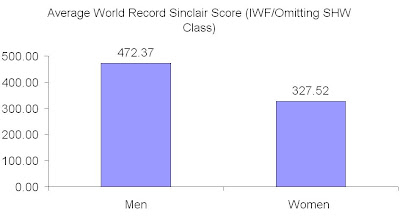 The use of the Sinclair formula has not had a similar effect on the weightlifting world record totals and men still have a sizeable advantage when body mass is taken account for. The validity of the Sinclair formula has been questioned for its validity by some authors (Kauhanen et al 2002 – http://journals.lww.com/nsca-jscr/Abstract/2002/02000/Standardization_and_Validation_of_the_Body_Weight.10.aspx).

Garhammer has reported this in the past. It can be down to a number of factors better fast twitch fibre distribution, more muscle mass, larger bones et al that could describe why men even when training is very similar and towards the highest level still show such an advantage even when body mass is accounted for. 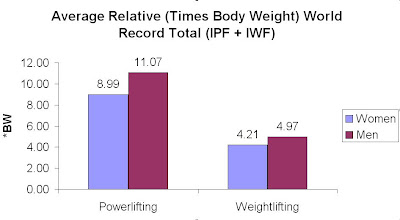 So on the whole we haven’t really learnt anything you probably couldn’t have told us at the start of this article. But we do have some actual data in handy graph form to back up any assertions you may wish to make.