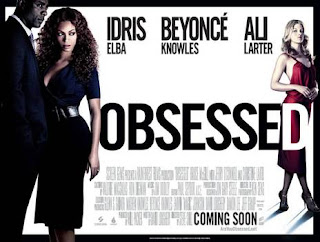 n
1. (Psychiatry) Psychiatry a persistent idea or impulse that continually forces its way into consciousness, often associated with anxiety and mental illness
2. a persistent preoccupation, idea, or feeling
3. the act of obsessing or the state of being obsessed – thefreedictionary.com

I think anyone that reads this blog would accept that we probably lie outside the realm of what might be deemed normal for the vast majority of society.  What society considers a normality however is subject to consistent change of the zeitgeist.  But two generations ago women’s rights was a new movement and racial equality didn’t really exist in any meaningful form in the United States needless to say a mere 100 years later and things are different.
In light of all the changes that society goes through on a consistent basis it would beggar the question why are people so resistant to new ideas or change?  And for that matter is it actually unhealthy to be fixated on your own performance in a what at the end of the day is a hobby or how you look/feel? 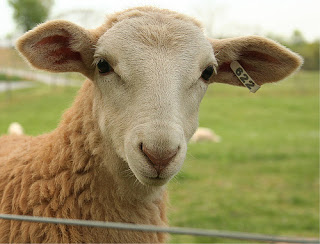 The wonderful world of Sheeple (tin foil hat optional).
Anyone with even a passing interest in reality will be perfectly aware of how as a social animal we are keenly interested in the emotive response of others in almost every situation.  People find it quite difficult to process what might represent a statistical risk to themselves but will take on or react strongly to a topic that society has a strong opinion on.
Drinking and Smoking versus “Hard Drugs” a case study in numbers versus opinion.
We can paint this bias in terms of actual numbers and the objective amount of harm caused by a substance and what society deems to be the correct behaviour or reaction to the use of these “recreational aids”. 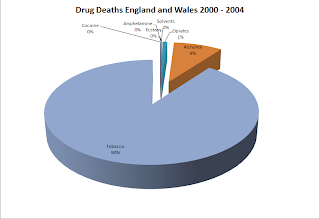 The above chart shows the percentage of deaths caused by drugs in the UK for the years 2000 to 2004 as you can see Alcohol and Tabacco make up 99% of all deaths (525,000 to 700,000 depending on what statistics you listen to) and the next biggest killer are opiates (this includes heroine, morphine and methadone) making up 1% of the sample (4,976 deaths) and the rest of the drugs can’t even make up a measly 1% between them.
Now we have had a look at a small smattering of what reality and statistics have to say on the matter let’s put this into a different context.  Look at the following two hypothetical facebook updates and see how you react.
Joana Smith – Heading out with the girls tonight gonna play hard after a hard week at work going to get CRUNK! Starting off with cocktails at my place! XXXX
John Smith – Going out to get messed up with the lad’s tonight.  Starting off with some Cocaine and Extascy to get a buzz then when were out gonna pop some Methadone for derset! Excited!
I wonder which status would gather the most attention on facebook and just what percentage of that reaction would be positive or negative.
Your opinion on topics such as this is heavily influenced by others to the point where you may as well not even have an opinion outside of the stock response.  People actually involved in the activity (taking MDMA on a night out) will have a completely different opinion and to be honest probably a more realistic or at least factually accurate opinion.
As someone going about your life without actually seeking for the statistics and looking at a subject in a hard scientific light, or actually being involved in the activity your inference is almost 100% made up by either societal or media opinion.  And as we know the media and society can be trusted to be correct… right? 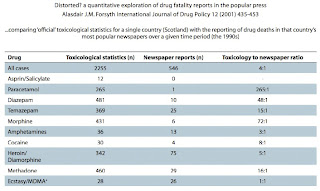 The above table makes for some interesting reading, when is the last time someone gave you a dirty look or lectured you on your horribly damaging paracetamol addiction?  Having resulted in 10x more death than Esctasy you might think it would draw some ire or attention from the media…  Society or the Media wouldn’t just deamonise something without good reason…. would they!?!?!
You don’t have to look far back in history to see the horrible effect on the world that unquestioning adherence to what society considers the correct behaviour has had.  Any amount of incidents of genocide or needless persecutions in history books still don’t change people’s opinion on critical thought or deliberately not just following what might be considered a normal reaction being an actively good thing.
This sort of thinking is pervasive in almost every aspect of our lives even on something as non consequential as to what we do with out sweet wrappers.

Field-experimental studies have shown that people litter more in more littered environments. Inspired by these findings, many cities around the world have adopted policies to quickly remove litter. While such policies may avoid that people follow the bad example of litterers, they may also invite free-riding on public cleaning services. This paper reports the results of a natural field experiment where, in a randomly assigned part of a residential area, the frequency of cleaning was reduced from daily to twice a week during a three-month period. Using high-frequency data on litter at treated and control locations before, during, and after the experiment, we find strong evidence that litter begets litter. However, we also find evidence that some people start to clean up after themselves when public cleaning services are diminished. – http://www.freakonomics.com/2012/07/20/garbage-and-the-herd-mentality/

So after that considerable meander away from the title of this post I hope I have demonstrated that what society might consider a normal behaviour or a desirable reaction might not necessarily be the correct thing to do. 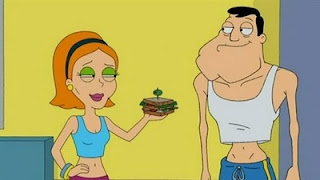 Is it harmful or obsessive to control your diet and exercise compulsively?

I think one of the most important things you can do when your questioning your own actions or looking introspectively is to try and be as honest with yourself as you can be.  You must first accept that your perception of reality is hugely self biased and subject to any number of psychological biases and heuristics.  I think it is safe to say that a lot of the people who engage in strenuous levels of weight training to increase their muscular appearance or who deny themselves an entire macro nutrient for months at a time so they can look lean suffer from some form of body dis-morphia and are not entirely happy with there appearance and probably never will be.
Now that we have that out of the way is it a harmful or obsessive behaviour?  Like anything it’s not a binary black and white question, we all lie on a spectrum of behaviour some of us just go to the gym 4x a week and eat some greens with dinner whilst other’s know to the gramme how much fat, protein and carbohydrates they are ingesting for the next week.
It might not be normal to have your nutrition plan set out via macro-nutrients and calories and then to work from there but calling it unhealthy to be lean and physically active would be a lie.  Again it might not be normal to do these things but if it makes the person happy and they don’t cause harm to themselves or other’s then where is the need for judgement?
It might not be normal to lift heavy on a near daily basis and to try and control my weight using different dietary interventions but I find it empowering to have the ability to change my body composition and I love lifting.
If I was to be a “normal” and not know how to get leaner, or not have a hobby to obsesses over and get better at I think I would be a much less fulfilled human being.  I don’t see how working a 9 to 5 job, eating 3 square meals and watching TV as my hobby would be a better alternative.
Sure people might question what you do and ask why you do it.  To those who genuinely want to know try your best to humour them you might be pleasantly surprised and maybe even make a new friend or gym buddy.  To those who judge from the fence of non participation remember one thing –

“People are products of their environment and unless they have an extensive practical or well developed understanding on the subject of which they speak there probably just regurgitating what the consensus opinion is either represented by the media or their social circle.  And as such dismissing their opinion as hot air will probably save you an argument or stress.”

This is not to make light of people with real psycological problems bulimia and anorexia kill much in the same way that taking obscene amounts of steroids and being 350+ lbs kills people on a daily basis.
With everything you must be measured and honest in your self reflection to avoid going too far in one direction at a detriment to yourself and those around you.
Marc.
Previous Post
Next Post