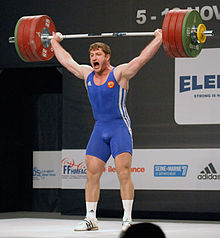 Russian 105er and bookies favuorite was looking likly to not even make the platform following a herniated disc.  However in a recent interview he talks of his intentions to not withdraw from the competition.

Russia’s weighlifting gold medal favorite Khadzhimurat Akkaev is ready to risk his health to take part in the Olympic competitions just four days after having surgery, he told R-Sport on Sunday.

Akkaev, the world and European champion, was expected to take the top prize in the 105 kilogram class Monday until he was forced to go under the knife for a back problem Thursday.
Akkaev said he refused to withdraw his entry despite doctors’ orders to refrain from exercise for six weeks.

“I still asked not to withdraw,” Akkaev said. “I still somehow can not leave it.”
“I worked hard, really. Even in such an unprepared condition, as I am now in, I might be enough to win. Somehow I have that hunch.”

Akaaev won silver in Athens and bronze in Beijing in the 94kg division before stepping up to 105kg, where he won gold at the world championships in Paris in November. Source – http://en.ria.ru/sports/20120805/174996936.html

His team mate Dimtry Klokov has also withdrawn on somewhat shakier grounds under “unspecified medical reasons“, these withdraws will undoubtedly come as bad news to any weightlifting fan who was expected the 105kg class to be the jewel in the London 2012 weightlfiting crown.

Coverage of the 105 kg B group starts at 15.30 GMT with the A group starting at 19:00 GMT and can be watched live on the BBC sports website.

I for one will be watching.

Bonus Interview with the Big man ahead of tomorrow night’s superheavy finals.