Who – Wannaburger a fast food company based in Edinburgh offer a half way house between McDonalds and a hipster soaked gastro pub.

Wanna burger is like a shiney McDonalds or burger king the interior is a bit nicer padded seats, booths with a nice clean look.  The addition of TVs and a selection of bottled beers or ciders gives it a bit more of a pub feel.  Quite often people will come in for the food and hang back either sitting with a drink and chatting or a group of well to do teenagers will sit about in the booth’s hanging around with the remnants of their coke or milkshake talking about which boy is the hottest in their class.

It’s a straightforward menu offering a selection of beef burgers, chicken burgers, hotdogs and drinks (milkshakes, soft drinks, bottled beer and cider).  Your order is taken at the counter which sits behind the kitchen open for all to see just like any fast food restaurant.  When you give your order and pay for it you are given one of the little vibration alarms that let you know when your order is cooked.  When the little guy buzzes then it’s time to go and collect your tray with all of your goodies on it.
Overall it’s a pretty chilled environment and you don’t feel rushed to smash your food and get out so another one of the herd can come and get there obesity burger and sit down to inhale it. 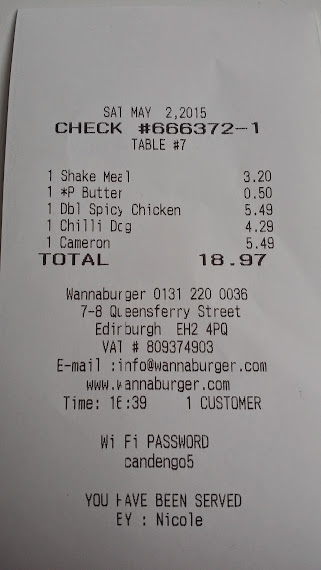 A large burger (double cheese and bacon burger and chips, double chicken burger or one of their specialty burgers) costs just over a fiver for whilst a hot dog or smaller burger will run you between 3 and 4 pounds depending on what you choose to dine on.  To make it a shake meal expect a supplement of 3.20 or for one of the fancy shakes you will pay and addition 50 pence.  For a small bottled beer be prepared to spend 3-4 pounds.
I went for 2 burgers and a hotdog from the menu and choose to add on the shake meal on to the specialty burger in total I paid £18.97 for probably in the region of 100-130 g protein and 2500+ kcal. 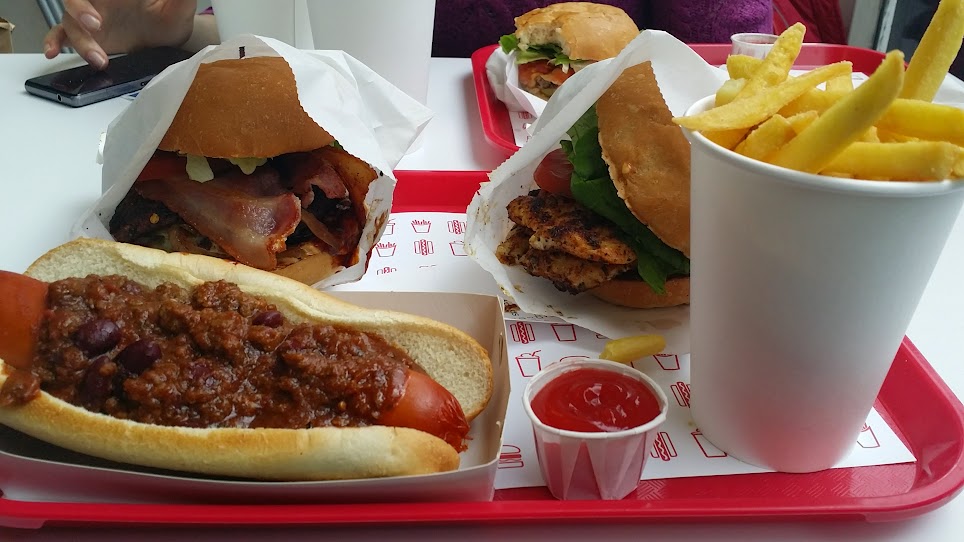 Overall – meal came on a tray pretty much identical to any major chain fast food resturant the packaging consisted of non branded bags and cups it had a clean look with a reassuring abundance of grease stains on some of the burgers.
Cameron Burger (specialty burger) – Double large patty of beef, 2 slices of real bacon, covered in barbecue sauce and beef gravy and topped with big slices of tomatoe and healthy amount of lettuce.  The burger tasted great it was a thin patty doubled up I would say similar in nature to a whopper from burger king.  It tasted like real minced beef and didn’t have that typical processed taste you might get from a McDonalds hamburger.
The bacon was well cooked not crispy and they used real rashers of back bacon no the usual reheated crap you get from most fast food restaurants.  The accompanying lettuce, tomatoes and jerkins where obviously fresh and sourced from a decent farm or grower.  The combination of gravy and barbecue sauce made it quite a messy thing to eat but the taste was great.  Probably the best fast food burger I have eaten would highly recommend.
Double Grilled Spicy Chicken – Two massive chicken patties together probably the size of a large chicken breast would probably give this burger 40-50g of protein in lean seasoned chicken.  The chicken was chargrilled making it quite smokey to eat and was well rubbed in a spicy seasoning mix.  It was accompanied with lettuce and tomato both of a great quality.  Served on a brioche bun the size of the chicken made it quite a difficult one to maneuver while eating it but it certainly represented good value for money
The chicken was fairly moist especially pleasing since it had been chargrilled the seasoning added quite a bit of extra bite something I grew to regret having finished my milkshake so quickly!  Overall probably the best value for money if you are looking for the best thing on the money to get the things you need out of your food (protein and calories) to aid in your strength or size training.
Chilli dog – The final in my trilogy of fastfood was the chili dog the bun was definitely the weakest of the three a soft finger role it felt like the usual quality you might get out of a multipack from tescos not a terrible bun as it didn’t interfere with the taste of the hotdog but it felt a bit out of place given it predecessors.  The hotdog was of good quality it had that highly processed feel that separates a sausage from a hotdog but it didn’t taste like it was made from solely sheep fingernails.
The chilli was an addition I would not go for again it made eating the hot dog very difficult without causing a calamitous mess and it had a pretty average taste similar to stag chilli heated up out of a can.  It almost certainly had the lowest protein content of the three.
Peanut butter milkshake – This was the surprise star of the show,  my partner got the vanilla milkshake which was without doubt the nicest milkshake I have ever drank it was the correct consistency and tasted smooth with a great vanilla aftertaste.  The peanut butter shake had a very good consistency but still suffered from the fragments of peanuts that make blending peanut butter such a hit and miss affair.
Fries – Crispy and thick (for a fry) with the addition of salt and tomatoe sauce a very worthy side dish they didn’t quite have the crispiness that sets out a great crisp or fry but they were certainly no slouch.