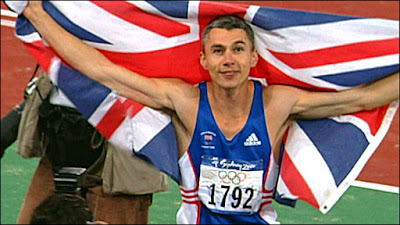 Jonathan Edwards looking jacked as phuck.
In the world of popular fitness articles and pop sports “science” we are afforded a zoo of pseudo-intellectuals trying to stick out in the crowd. To this end they are very inventive with their material since novel ideas will always have a greater impact than the tried and tested method of the old guard. However the sexy world of online articles and Men’s fitness magazines has little or nothing to do with truth or the real world.
Over this periodical instalment I will look at ideas new and old ideas that have impregnated themselves into the minds of the lay trainer through the pervasive fallace of disingenuous over intellectualisation.
Since the early half of 2000s it became law of the interwebs that one was required to lift with speed to induce eye watering gains in hypertrophy. This jump in rational was based in the size principal of motor unit action (see figure) being that to recruit the highest threshold motor units (MUs) one can either lift fast or lift maximally. This however is a false dichotomy.

The primary mechanism behind the hypertrophy response is the super-compensation reaction to damage induced to muscle fibres under repeated force demands. When the muscle is asked to fire alot of muscle fibres repeatedly to overcome a stress induced by a load it will try and prepare next time by increasing the size of these muscle fibres to better cope with the stress of repeated exposure to repetitive force demand.
A simple way of expressing this is that higher levels of volume will create a higher demand for mechanical development or hypertrophy. When repeated demand for single effort force or speed demands are required a change in fibre type and other neurological adaptations are the go to adaptation.
All one needs to do is look at the physique of a lower weight class weightlifter compared to the average gym rat. The gym rat will almost definitely have a larger looking physique to a weightlifter yet will not be anywhere near the force production capabilities.
This can be put down to the volume of work a bodybuilder or gym rat will ask of muscle fibres in different planes of movement hypertrophying more muscle fibres as a result and producing a bigger looking physique.
Almost every bodybuilder on a stage in a pro show is a product of calories, volume of work and drugs, not of snatching or doing plyometrics.
If your goal is to look like a bodybuilder train like a bodybuilder, if you want to look like a weightlifter or a sprinter take up weightlifting or sprinting.
The sooner you stop buying into the fantastical world of “new age” training the better off you will be and the sooner you will realise your goals.
Marc.
Previous Post
Next Post