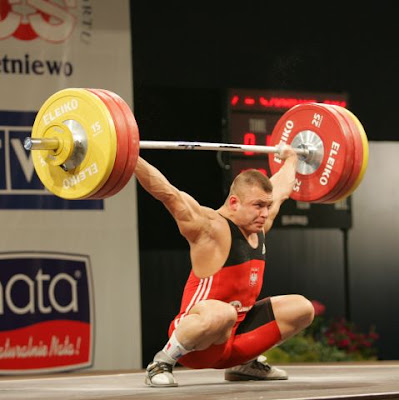 Squat depth is one of those issues in the field of strength and conditioning, physiotherapy and gym rats the world over that can cause massive divides as soon as it is mentioned. It can end up in bust ups between support staff or forum flame wars with the all the zeal of a religious fanatic.


The actual objective data on the matter is scarce with biomechanical studies coming up with conflicting recommendations we will now look at two studies which could be used to argue either case.

Conclusions: The squat was shown to be an effective exercise to employ during cruciate ligament or patellofemoral rehabilitation. For athletes with healthy knees, performing the parallel squat is recommended over the deep squat, because injury potential to the menisci and cruciate and collateral ligaments may increase with the deep squat. The squat does not compromise knee stability, and can enhance stability if performed correctly. Finally, the squat can be effective in developing hip, knee, and ankle musculature, because moderate to high quadriceps, hamstrings, and gastrocnemius activity were produced during the squat.

Escamilla performed a review of the literature in 2001 and recomended that athletes with healthy knees should not perofrm the full squat due to a precieved increase in the chance for injury on menisci and cruiciate collateral ligiments. This review adds some scientific weight to the assertion that squatting to full depth may be dangerous.

The results of this study do not support the premise that squatting to 110° places greater stress on the patellofemoral joint than squatting to 70°. These findings may have implications with respect to the safe design of athletic training regimens and rehabilitation programs.

In the same year (2001) Salem and Powers produced a biochemical analysis which showed that peak forces actually occurred at middle depth (parallel) in the knee joint. Now this is an indirect model on 5 athletes so it is not exactly beyond repute however it does offer some scientific weight to the assertion that squatting to full depth is perfectly safe. 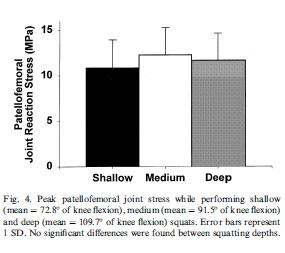 So with no meta analysis or systematic reviews in the field too confer a consensus and given the mixture of results given in the literature what is one to believe?


Well there is a case study where full squatting happens under much heavier loads than most athletes will ever squat, dynamically and with massive amounts of volume. I am of course referring to the sport of weightlifting.

Results:
The back (primarily low back), knees, and shoulders accounted for the most significant number of injuries (64.8%). The types of injuries most prevalent in this study were strains and tendinitis (68.9%). Injuries of acute (59.6%) or chronic (30.4%) nature were significantly more common than recurrent injuries and complications. The recommended number of training days missed for most injuries was 1 day or fewer (90.5%). Injuries to the back primarily consisted of strains (74.6%). Most knee injuries were tendinitis (85.0%). The majority of shoulder injuries were classified as strains (54.6%). Rates of acute and recurring injuries were calculated to be 3.3 injuries/1000 hours of weightlifting exposure.
Conclusions:

The injuries typical of elite weightlifters are primarily overuse injuries, not traumatic injuries compromising joint integrity. These injury pattems and rates are similar to those reported for other sports and activities.

This study of the US National team shows that the majority of injuries of weightlifting are down to overuse and inflammation and not of an acute nature which would not support the assertion that deep squats are dangerous. Weightlifters squat to full depth with cleans, snatches, catching drill and all squatting drills this represents the majority of their volume.


Given that they train 6x a week 2-3 times a day one would expect that if deep squatting where in fact significantly more dangerous than parallel squatting then acute knee injuries would manifest themselves in far greater numbers in this sport.

Squat Depth as a function of Sport Specificity.


The use of squat depth for certain sports such as the use of heavy partial squats for skiers or jumpers is still appropriate and good practice. This however needs to be context sensitive if it is not included along with full squats somewhere in the programme as part of an irrigated approach then the coach needs to question their reason for using any heavy partial.


Full Depth advocates will argue that only by going ass to grass will you recruit the glutes and hamstrings given the increased hip flextion at the bottom. This is based on a study carried out in 2002 by Casterino published in the Journal of Strength and Conditioning (http://journals.lww.com/nsca-jscr/Abstract/2002/08000/The_Effect_of_Back_Squat_Depth_on_the_EMG_Activity.14.aspx )


However with only one EMG study to back up this assertion it is not exactly a water tight argument for full squatting.


Given the lack of evidential support for either assertion about depth and safety certainly the rule of thumb (full range of motion unless otherwise states) should hold true for squatting as well.


Coaches will jump on athletes for performing half reps in almost any exercise (as they should) except for the squat for some asinine reason that does not evidently manifest itself anecdotaly or in the literature.


Partial squatting should form part of the approach where appropriate in the training programme however it needs to be used for a reason and not just thrown in because it is more “specific” or “safer”. Compressive loads on the spine during half or quarter squats can FAR exceed those used in full squats due to the greater potential for higher loads therefore they need to be included in a programme that offers full physical development.


Further research is required as well as future meta-analysis of the area so that a more authoritative consensus may be reached.