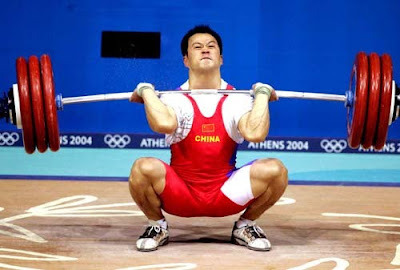 Weight training is far more than a sport the vast majority of people who train with free weights are looking too effect their asthetics be that through bodybuilding, cross fit or a whole host of methods geared towards changing their physical apperance.

To that end the the american jornal of sports medicine produced a review of weightlifting related injuries that where omited too acident and emergency wards across the US between 1990 and 2007. During the 17 years covered by the study they reported a total of 25, 335 incidencies of injury the majority of which came from dropped weights (65.5 % average across all populations). 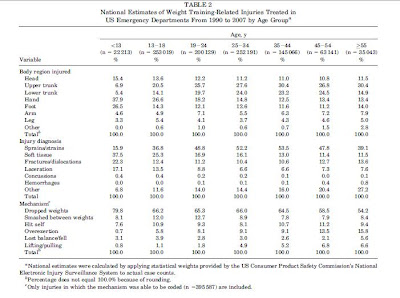 Given the extreme popularity of weightlifting 25,000 incidcies is a very low number when juxaposed with 517, 726 American Football related injuries ommited in ONE year (2005-2006 season) Prasad et al 2007, The American Jornal of Sports Medicine (http://ajsm.highwire.org/content/35/8/1295.abstract). So as a physical activity it would appear that unsupervised weight training is relatively safe with 0.04% the accident and emergency admissions of American football.

These leads us on to our next comparison.

The Relative Safety of Weightlifting and Weight Training

Hamill conducted a large survey of school activites and sports in 1994 included where weightlifting and weight training (including bodybuilding and powerlifting). 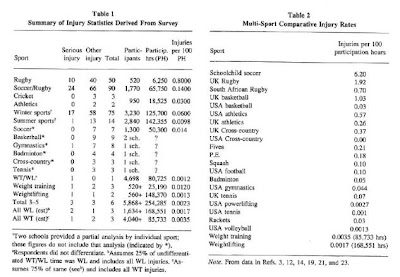 That is a lot of training before an injury manifests itself when comared with school yard soccer where and injury occurs on average after 16 hours of exposure.

Now this data is not 100% authoritative but we are starting too pain a reasonably compelling picture that weight lifting and power lifting may be pretty safe activities.

101 power lifters took part in a one year retrospective study involving a questionnaire to ascertain the prevalence of injuries in the sport. A total of 118 injuries where reported or a instance of 1.2 injuries per participant over the year.

This equated to a 3.6 injures for every 1000 hours of training which puts it into the low to moderately low category for injury risk.

Calhoon and Fry followed around the US elite weightlifting team for 6 years during this period 99 injuries total where recorded 90.5% only took the athlete out of training for a day or less.

The incidences of injury occurred mainly too the lower back or knee and consisted mainly of tendinitis and strains.


They reported an incident every 3.3 hours after 1000 hours of training exposure on average.


In 2002 Raske and Norlin published a combined longitudinal study on elite level power lifter and weightlifters in the American Journal of Sports Medicine, here is the abstract.

As you can see they found a similar incidence of injuries 2.6 per 1000 hours of exposure and a similar split between where the injuries occur. 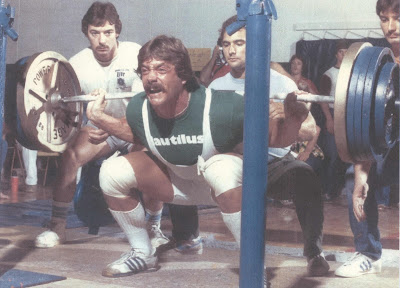 
When one looks at the actual epidemiological data or any reviews on the subject of injuries in weightlifting a common trend appear that when put into a context with other sports weightlifting, weight training and power lifting are of a very low risk factor.


Power lifting and Weight lifting offer nice comparison and some surprising outcomes. Where the injuries in weightlifting are almost all of a chronic nature power lifting accidents are more of a sudden or acute nature this could possibly be attributed to the range of motions used and the flexibility profiles of both types of athlete.


The sites of injuries is to be expected shoulder, back and knee all bare the brunt of the load in both of these sports however given the low injury rates (2-3 injuries per 1000 hours of exposure) there is not reason for sports people to be scared of injury since they on average probably weight train 2-4 hour a week. Of course that will vary between sport and level of the athlete.


All in all weight lifting and variantswould appear to be a safe form of physical activity and sporting endeavour.