There is a theme that underpins all training programs that are of any quality it is as simple to say as it is difficult to put into action.  All sports training, when put into the context of your goal and the time frame, are linear.  You can have the most random fucking process in the world but if your program produces a certain result in a time frame then it is in essence linear. 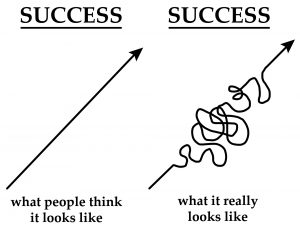 You have probably seen the following meme/picture used on Instagram, facebook or wherever you spend the majority of your time at work.  If we look at it in the process of programming then it very much is accurate.

The path a is just straight from A to B and path B is the same beginning with the same end goal but how you get there is longer, wider and more drawn out.  This sums up programming and periodisation in a nice little nutshell.

You can’t have a periodisation without a period of training.  You see with no context, no calendar or competitions then you can’t really set out a routine all you can do is slap together training cycles.

What we have in training is someone who is at point A or in a current state of training or fitness who wants to get to point B which is a certain level of training or fitness.  How we get them there is down to the discretion of the coach, the ability/training age of the athlete, the time frames we have to work with…. Etc.

What are the time frames involved in periodisation?

Let’s get the terminology correct before we go any further with my explanation or I try and put across my point.

A macrocycle is an annual plan that works towards peaking for the goal competition of the year. There are three phases in the macrocycle: preparation, competitive, and transition.[6]

The entire preparation phase should be around 2/3 to 3/4 of the macrocycle. The preparation phase is further broken up into general and specific preparation of which general preparation takes over half. An example of general preparation would be building an aerobic base for an endurance athlete such as running on a treadmill and learning any rules or regulations that would be required such as proper swimming stroke as not to be disqualified. An example of specific preparation would be to work on the proper form to be more efficient and to work more on the final format of the sport, which is to move from the treadmill to the pavement.

The competitive phase can be several competitions, but they lead up to the main competition with specific tests. Testing might include any of the following: performance level, new shoes or gear, a new race tactic might be employed, pre-race meals, ways to reduce anxiety before a race, or the length needed for the taper. When the pre-competitions are of a higher priority there is a definite taper stage while lower priority might simply be integrated in as training. The competitive phase ends with the taper and the competition.

The transition phase is important for psychological reasons, a year of training means a vacation is in order. A typical weekend warrior might take three months while a professional athlete might take as little as two weeks.

A mesocycle represents a phase of training with a duration of between 2 – 6 weeks or microcycles, but this can depend on the sporting discipline. [6] A mesocycle can also be defined as a number of continuous weeks where the training program emphasize the same type of physical adaptations, for example muscle mass and anaerobic capacity. During the preparatory phase, a mesocycle commonly consists of 4 – 6 micro-cycles, while during the competitive phase it will usually consist of 2 – 4 micro-cycles depending on the competition’s calendar.

The goal of the plan is to fit the mesocycles into the overall plan timeline-wise to make each mesocycle end on one of the phases and then to determine the workload and type of work of each cycle based on where in the overall plan the given mesocycle falls. The goal in mind is to make sure the body peaks for the high priority competitions by improving each cycle along the way.

A microcycle is typically a week because of the difficulty in developing a training plan that does not align itself with the weekly calendar. Each microcycle is planned based on where it is in the overall macrocycle.[6]

A micro-cycle is also defined as a number of training sessions, built around a given combination of acute program variables, which include progression as well as alternating effort (heavy vs. light days). The length of the micro-cycle should correspond to the number of workouts – empirically often 4-16 workouts – it takes for the athlete or fitness client to adapt to the training program. When the athlete or fitness client has adapted to the program and no longer makes progress, a change to one or more program variables should be made. – Wikipedia 2017

Putting together blocks of training

You see what we are presented with as lifters or people online is usually a stand-alone macrocycle or mesocycle which on it’s own isn’t really much of anything.  If we were to put it into another context where we have a year of training (macro-cycle) and the first 6 months of that are 2×12 week training cycles which follow a similar thread of thought.  This might look something like this. 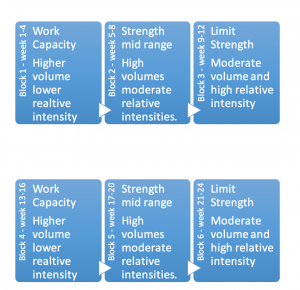 You see here we have a top-down look at the 24 weeks of training you can see we have the goals and generalities outlined in the flow chart above and you can see in more detail how that looks from a week to week view using intensity and volume as our measures.

This is where people get confused and where some people jump off the deep end and think that whatever training cycle they have made up somehow warrants a method or an ebook.  If I pull out block 2 from that example block we can see what it looks like for one exercise.

You can see a very basic pattern here where the weeks flip flop between volume and intensity this isn’t some world shaking idea it just changes the primary stressor from week to week.  This means we are loading the body in a more gradual but no less systematic or planned way.  Now I could take this idea out and claim it to be the #castironstrengthmethod but that would just be silly.  All it is, is a split of volume and intensity.  Nothing more nothing less.

This fluctuation is good for all lifters but really good for more trained lifters as it stops them hammering the same nail all of the time.  Yet from week 1 to 24 there is a linear trajectory even though the lines are wiggly, that is a linear program it’s not a weekly undulating program it’s just a planned out 6 months of training.  Which could be for a lifter 6 months of preparation, or specific fitness. 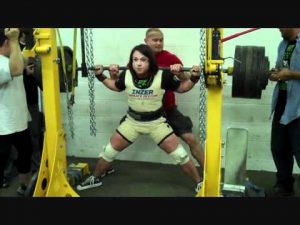 The Conjugative system is a straw man.

A lot of people have made a lot of money off the back end of the Westside system and its shoot offs.  The internet was and still is a wild and crazy place where fat men can squat high as fuck in bionic suits and claim to be something other than a side show.  No actual method of training worth a fuck just does one kind of muscular contraction or energy system on its own it doesn’t happen.

No strength or powerlifting program should be without these elements at any time there is no such thing as this sets x reps for power, this for speed or that for size.  It’s a moronic and overly simplistic form of thinking, biological systems don’t all of a sudden switch their reaction due to a number of reps done.  Your biceps don’t sit and count reps, okay lads we’ve stopped at 3 THIS IS A STRENGTH WORKOUT.

Muscle contraction, adaptation, and stress all occur on a spectrum, biology is analog strength doesn’t all of a sudden turn into the size and then eventually endurance by some artificial barrier of an arbitrary statement made by some melter with a sports science degree.

Your body will respond appropriately to the stress applied and to the magnitude of the stress applied.  A progressive volume stimulus applied to the biceps over time will lead to hypertrophy of the biceps.  A mixture of volume, intensity, skill accusation and maximal contraction will lead to better performance in a specific lift but the stress being applied needs to be specific to the lift you’re trying to improve at.

Get your head out of this way of thinking there is no such thing as a hypertrophy rep range or a strength range.  There is only muscular effort, intensity, volume, frequency, variation, and specificity.  How we play with these variables to provide systemic, systematic and appropriate overload over the training life of a lifter or athlete determines their success (all other factors being equal).

The best programs produce great results without undue stress or breakdown, finding this line with lifters and athletes is about fine tuning your methods to their physiology and psychology. 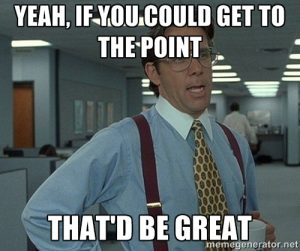 Sum all this shit up in 4 sentences.

There is no one size fits all solution.

All progress on a long enough time frame is linear.

Be clear on your training objective at all times and never stray from it.