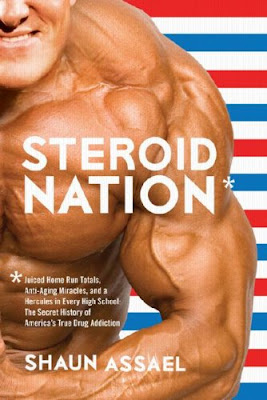 The book Steroid Nation by Shaun Assael was released in October of 2007, the book takes the reader on a narrative of steroid use and culture in the United States. Starting from the beginnings of the “golden age” of bodybuilding the book follows Dan Duchaine and other luminaries from the pharmaceutically enhanced world.

The book is written in first person perspectives that the author has pieced together using either interviews of the person. In some cases where the person is no longer with us he uses interviews of family and friends.
What follows is a personable history of steroid use and dealings with in the US both in bodybuilding and other sports. The book remains pretty neutral throughout not dwelling too long on the sticky subject of morality or morbidity of the drugs leaving the reader to make up their own mind pretty much through out.
The book offers some very interesting insights into the use of chemical enhancement in elite sport and the life styles of those who live, eat and breath bodybuilding. It also provides a fascinating narrative involving those defying the law by dealing steroids and those trying to enforce prohibition.
This book comes highly recommended for those interested in the social ins and outs of this thorny issue.
4 needles out of 5.