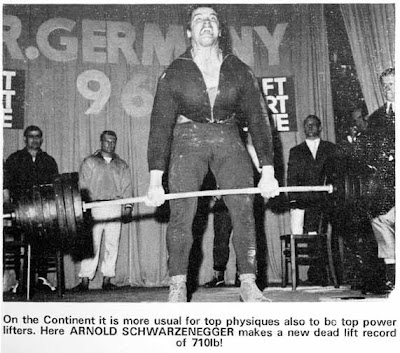 Here is an Article detailing arnold’s competitive history as a bodybuilder, weightlifter and powerlifter during the very early days of his carrer (1960-1969).

It makes for pretty intresting reading here are a few highlights.

1963 Olympic lifting competition. In an interview with Peter McGough (M&F, July 1997, p. 60), Arnold told of competing in a competition at a beer hall in Graz in early 1963. This was apparently Arnold’s first contest. He lifted 165 lbs overhead, beating his previous best of 150 lbs. It is not clear whether this was a jerk or a press.

1964 Styrian Junior weightlifting championships. Albert Busek’s article on Arnold (Kraftsport revue Nr. 30, Jan 1967) states that Arnold was the Steirischer Jugendmeister in the Autumn of 1964. The winning weight is given as 280 kg (616 lbs). However, the English version of Busek’s article (H&S 30th March 1967) claims a total of 705 lbs. Neither article is clear about which lifts were included.

The H&S article reported best lifts of, Press 264 lbs, Snatch 243 lbs and C&J 298 lbs. There was no suggestion that these were the lifts from the 1965 Austrian contest.

1968 German powerlifting championships. A brief summary of the results was given in Kraftsport revue (Nr. 45, p. 38). These indicated that Arnold deadlifted 310 kg for a total of 725 kg. Full results were promised for issue nr. 46, which I don’t have. However, Thomas Klose has previously told us that the full results were later reprinted as, Squat 215 kg, Bench 200 kg and Deadlift 310 kg.

The impression given in ‘Education of a Bodybuilder’ was that this was Arnold’s last powerlifting competition.