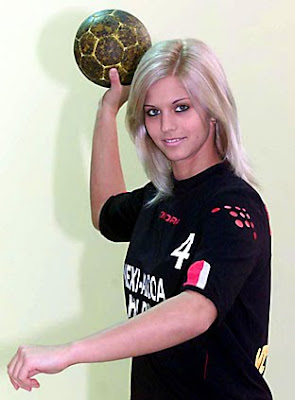 The Effect of Heavy- vs. Moderate-Load Training on the Development of Strength, Power, and Throwing Ball Velocity in Male Handball Players – Volume 24(9), September 2010, pp 2408-241

This study is interesting due to the sport used and the subject it is looking at.
The sport is interesting because the kinematics of the actual activity tested (throwing of the handball) and of the weight training exercises used (bench press and pullover) are very similar and provide a decent test of the effectiveness of the two protocols.
That subject is the merit of using loads that allow the athlete to develop greater velocities and thus have better carry over to their sport versus using maximal loads to develop top end force production.
There where three groups – Control (n=8), Heavy Resistance Group (n=9) and Moderate resistance group (n=9). All subjects where elite handball players. What follows is the protocol for each training group.

Both HR and MR programs continued for 10 weeks. Two training sessions per week were performed on Tuesdays and Thursdays, immediately before the normal handball training sessions. A researcher supervised each workout to ensure that proper procedures were followed. Both 1RMBP and 1RMPO exercises were used to determine appropriate loads for training sessions. 1RM values were reassessed at the fourth week, and the loads were updated for both HR and MR groups as necessary.

Heavy resistance group: Each session included 2 exercises for the upper extensor muscles (pull-over and bench press), with subjects training at 80-95% of their personal 1RM. They performed 1-3 repetitions per set and 3-6 sets of each exercise with 3- to 4-minute rest between sets. Both the pull-over and bench press exercises require successive eccentric-concentric loaded contractions performed at a slow velocity. The prescription of such loading intensities with such velocities is designed to produce the greatest increases in maximal strength.

Moderate resistance group: Each session included 2 exercises for the upper extensor muscles (pull-over and bench press), with subjects training at 55-75% of their personal 1RM. They performed 3-6 repetitions per set and 2-4 sets of each exercise with 1-to 1.30-minute rest between sets. Both the pull-over and the bench press require successive eccentric-concentric loaded contractions, performed as rapidly as possible.

As you can see from the protocols the percentages used and the contraction velocities are the complete opposite of each other. One question I would have if the “slow” contractions in the strength group where down to load or intentional slowing of movement anyway what’s interesting about this study is the findings. 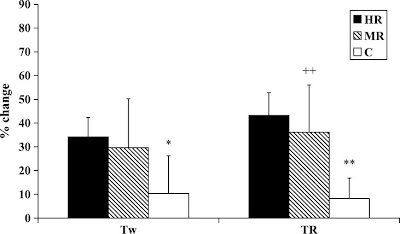 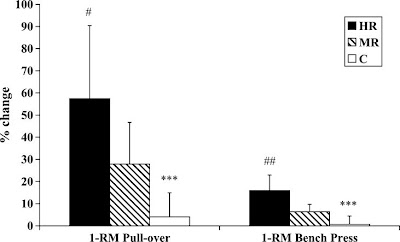 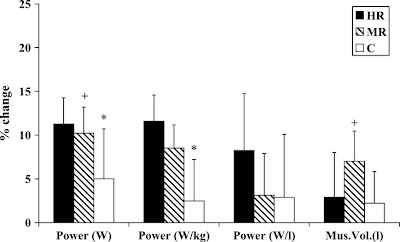 The heavy resistance group outperformed the “velocity” group in all measures except for hypertrophy which was much greater in the medium resistance group this can be attributed to volume (as in reps x sets) as HR consisted of 3×5 – 2×3 over the 10 weeks and MR consisted of 4×6 – 3×4.
The greater increases in power and sports measures in the heavy resistance group are probably the opposite of what most people would expect to find.
Whilst only one study and thus with little weight of evidence it still makes for very intresting reading.
Previous Post
Next Post