If you haven’t seen some of the latest gadgets doing the rounds such as push bands, barbell sensi or gymaware then you’re probably not on the internet very often or you’re not involved with performance sport.  These are the new more user friendly versions of products such as muscle lab or the tendo unit that decipher bar displacement and velocity.  Combined with the knowledge of your mass and the external load you are shifting they can be used to infer – power output, velocity, force output, bar path and a whole load of interesting data.  In this two part article I plan to show you what barbell velocity means and how it can be included into your training programmes.

Introducing the concept and looking at the limited research

Barbell Velocity can be used with in the strength and power programme to any number of goals such as feedback, monitoring or testing.  It’s usefulness is only really limited by the coaches imagination and ingenuity.  What follows is a discussion on what variables are available, what little velocity based training research there is and what it has shown.

This article series will end with some ideas on how you can utalise it to enhance your strength and power programme and what you can expect to see when you are using velocity based feedback.

What Variable should I use when working with velocity based training?

Barbell velocity devices can offer a large variety of different variables you can work with or give feedback in real time to either the coach or the athlete.  It is really up to the coach and the goal of the session or the exercise that will determine the best variable to use what follows are some suggestions on what variables can be used and to what end they may be best suited.

Velocity based training is a relatively new concept being proposed at the time of writing by a numbers of proponents most notably the developers of PUSH a wearable device designed to measure bar or user speed.  The central concept in Velocity based training is based on spending times in training “zones” that will develop the physical qualities you wish to achieve in the session.

Although limited some studies have used barbell velocity to look at various training outcomes.

Rep Velocity during sets and fatigue. 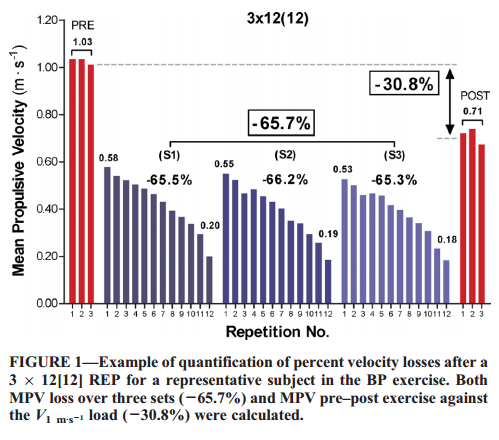 Medina and Badillo (2011) – looked at the effect of barbell velocity decrement over a set and how it correlated with other markers of mechanical (3 reps on a 1 m/s load and CMJ pre and post) and Physiological (Blood Lactate and Ammonia Analyses).

Using 18 subjects they investigated the effect of 15 different sets x rep schemes and their effects on the four markers mentioned in both the squat and the bench press.

They showed strong correlations with all measures of fatigue pre and post exercise.  This scaled with the number of reps performed in each set (3×12 through to 3×2).  The full table of results can be seen below.

Randell et al 2011 looked at the effects of instant velocity feedback on sports specific tests in 13 professional rugby players. They were split into two groups instant feedback group (n=7) and non feedback control (n=6) over a 6 week training block consisting of 3 sessions consistent with a normal preseason (2 of which had 3 sets of 3 concentric squat jumps using 40 kg).  The instant feedback group were told after each rep their peak velocity whilst the other group received no feedback.

Pre and Post testing was performed for both sets of athletes consisting of vertical jump, horizontal jump, 10m, 20m, and 30m sprint times.  The feedback group managed to positively all measures to a greater extent than the non feedback group (0.9-4.6% vs -0.3 to 2.8%).  All improvements showed a small effect size with the exception of 30m sprint which was considered moderate.

Lactate tended to be significantly higher for maximum velocity group.  Both groups experienced the best training improvements with velocities equal or slower than 0.8 m/s.

Maximum Intended Velocity during the squat exercise and it’s effect on strength and athletic performance.

Training programme used for the study. 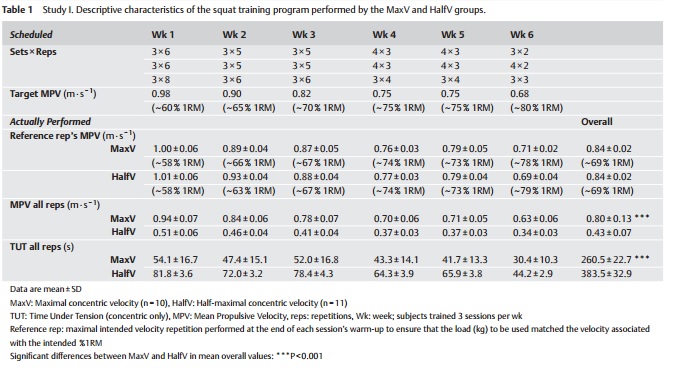 For strength and athletic outcomes it would appear that the velocity of movement is an important training outcome given that both groups lifted the same volume and intensities the only distinctive difference was the velocity of the barbell.

Moving forward into using velocity in our training programmes.

There is little evidence to suggest that velocity based training is in any way superior to percentage based training to determine volume loads and intensities.  The potential sensitivity to an athlete’s preparedness on any given day makes it a possible tool to quantify and objectify “autoregulation” perhaps more accurately than RPE based training methods.

The velocity of the barbell at submaximal loads might convey a strength benifit which would be of interest to maximum strength sports (powerlifting, weightlifting and strongman) since it would potentially allow athletes to make progress using non fatiguing loads which could potentially allow for higher volumes and frequency of practice.

In the next instalment we will explore some real world data collected from elite, well strength trained athletes and some suggestions on how velocity based training could be manipulated to get some outcomes for athletic and strength sport populations.