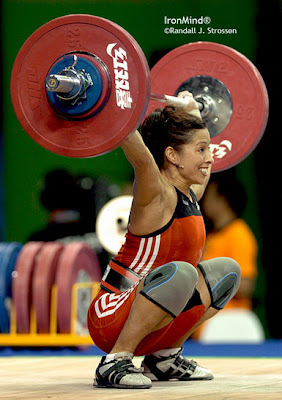 Weightlifting is 100% about position, although a strength sport even the strongest of lifters will struggle to realise their full potential if they do not adhere to the optimal bar path for their build. It takes years of practice to develop a form that is efficient for any one lifter. If you are not aware or constantly looking for the correct positions you are pretty much fucked from the outset.

The form on both clean and snatch lifts have common positions and are practically the same thing with a different the catch. The snatch however over exaggerates the importance of position since it is almost impossible to muscle a badly placed snatch from a full squat position.
In this short article I will be looking at the three positions – First pull to the knee, Transition into second pull and turning under the bar and catching. During these sections I will be using pictures and videos of weightlifter to illustrate my points.
First Pull
The first pull brings the bar from the floor to past the knee in a manner that will allow for an efficient scoop of the bar/second pull. If this part if the lift goes wrong the rest of the lift will suffer tremendously as a result. Below are pictures showing the form required to reach a good position to transfer from. 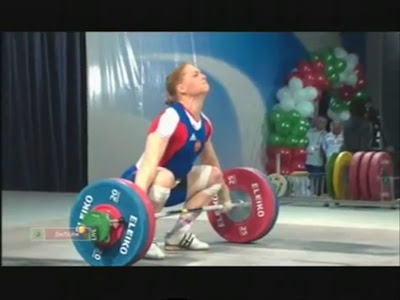 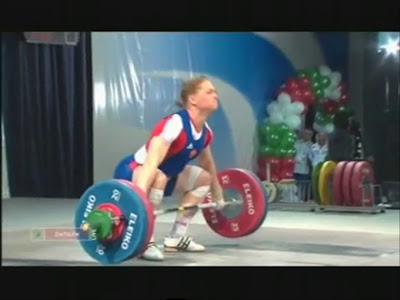 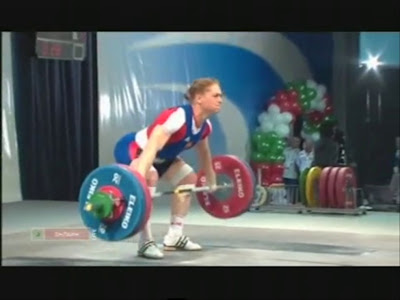 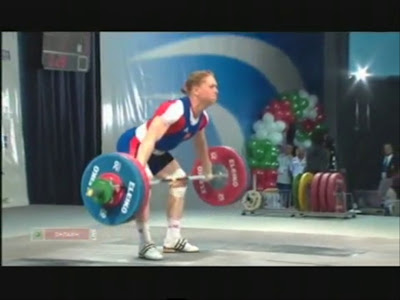 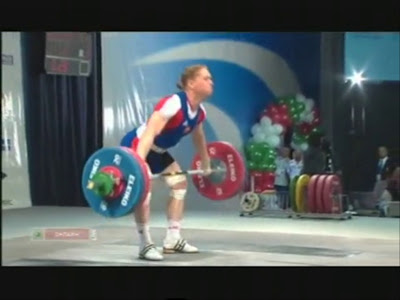 Oxana Silvenko of Russia (69 kg class) Snatching 116 at the 2010 European Championships.
The picture above show the positions form the floor to above the knee just before the lifter starts to transition into the second pull position of the lift. The segments and screen shots above will be labled 1-5 for teh following written explanation.
1 – At the very start of the lift the lifter assumes a position from where they can set there back in a straight a position as possible since loosing back position means loosing position at the end of the lift leading to a no lift in the case of a well drilled lifter. Sitting back with weight placed over rear/mid-foot.
2 – As the lifter rises the hips kick up slightly as the glutes/hamstrings take the load from the floor this flat back position with shoulders over the bar will be held for the remainder of the first pull.
3 – As the bar rises the lifter holds the back position Isometrically and allows the legs to take the load, as the bar continues to rise the lifter will drive the knees back allowing the bar to come up in a straight line unimpeded. Throughout the whole lift the arms and shoulders will remain lax and the bar will be left to “hang” in position.
4 – As the bar reaches the patella the first portion of the lift is almost complete and the athlete will start the acceleration of the bar leading into the second pull position.
5 – The athlete is now at the end of the first pull with the bar slightly out in front/above the knees, knees almost locked out (maintaining a slight bench), shoulders over the bar still and weight placement towards the back of the foot.
In the next section of this article series we will look at the transition/second pull and receive.
Previous Post
Next Post