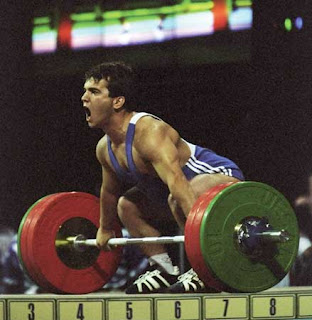 Born in Bulgaria of Turkish descent, he was nicknamed “The Pocket Hercules” due to his small stature of 1.47 m (4 ft 10 in). He is the second of only seven lifters to clean and jerk three times their bodyweight.[1] Suleimanov set his first world record at the age 16 but missed his first chance at Olympic success in 1984 when Bulgaria joined the Soviet boycott of the 1984 Los Angeles Olympics.
Soon afterwards the Communist regime in Bulgaria forced its Turkish minority to adopt Bulgarian names and he became known internationally as Naum Shalamanov (Наум Шаламанов). While on a trip to the World Cup Final in Melbourne in 1986, Suleimanov defected. He resurfaced in Turkey and applied for citizenship. He also changed his name from the Bulgarian Suleimanov/Shalamanov to the Turkish Süleymanoğlu.
A battle over which country he would represent in the 1988 Seoul Olympics arose. The Bulgarian government demanded and received $1,250,000 from Turkey to allow him to compete for Turkey. Süleymanoğlu did not disappoint, winning the featherweight gold medal. He retired at the age of 22, after winning the world championship in 1989. However, he returned in 1991 before winning a second Olympic gold medal at Barcelona in 1992. Between the Olympiads, Süleymanoğlu continued to win world titles and set records.
The 1996 Olympic Games were to be his swansong and he retired after winning a third consecutive Olympic gold medal in Atlanta at the 1996 Olympic Games.
Süleymanoğlu made another comeback in a late attempt to earn a fourth gold medal at the 2000 Olympic Games in Sydney but failed to lift 145 kg, which would have been a World record, and was eliminated from the competition. He was awarded the Olympic Order in 2001. In 2000 and 2004 he was elected member of the International Weightlifting Federation Hall of Fame.[2]
At the 1999 general elections, he stood as an independent candidate to represent Bursa at the Grand National Assembly of Turkey. In 2002 he was the candidate of the Nationalist Movement Party for the mayor of Kıraç municipality inBüyükçekmece district of Istanbul Province and represented the same party in general elections in 2006. He was unsuccessful in all these attempts. Wikipedia – 2012

Some video of the man in action.