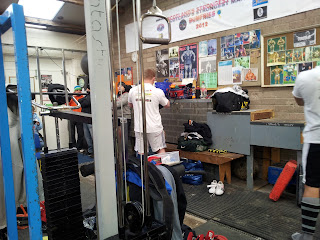 Athlete’s beside the stoning platform 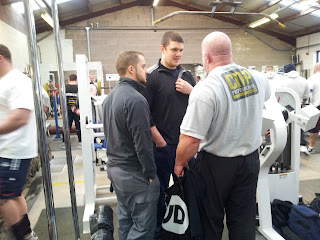 Stuart Murray, Organiser WSM competitor and Forearm Adonis
Where – Burns Gyms, Dunfies, Scotland
When – 12th January 2013
Who – 22 Scottish Athletes from the length and breadth of the country, many old and new faces.
Events
Event 1 – Overhead Medaly 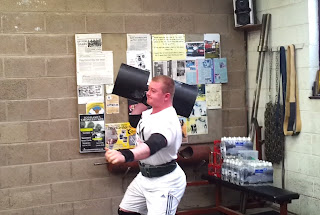 The Medaly consisted of 120 kg Log for one rep, 75 kg Giant Dumbbell for 2 reps and then to cap it all off a 150kg Log for one rep.  Being the very first event nerves where on show for many competitors the opening Log even proved too much for some.  The majority of people managed to rep the 120 then move on to what looked like a horrible implement in the 75 kg Dumbbell.  A number of people struggled to get a good position on the shoulder to allow them to press it out and a few had some close calls!  Then the last implement the 150 log proved to be too much for almost all with only Big Steven Cherry from Kirkclady managing to press it.
Winner + My personal favorite performance – Steven Cherry
You can see Steven’s medaly performance and the rest of his events in the video below.
Event 2 – 180 kg Shield Carry 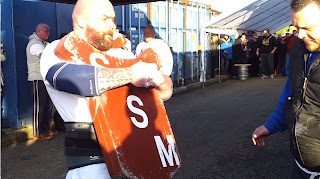 The Beard with Gary at the 15m Turn
In what always proves a grueling test of pain tolerance athletes moved onto the shield carry the shield in question where 2 180 kg steel shields to be carried as far as possible making a turn at each 15 meter interval once they dropped the shield they were out of the event.  Being head to head added a bit of extra omph for the crowd who really got behind the athletes.  Some surprises to be had in this event with Brian Wilson from Ayshire going a commendable 70+ meters showing that it’s not always the biggest or the strongest lads who can win at this sport.  The overall winner was Luke from Inverness who didn’t fail to impress on any events and went 105 meters.
Winner – Luke with 105 meters
Personal Favorite – Brian
Event 3 – Loading Race 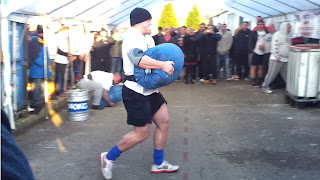 The third event involved a loading race Athletes where given a 90 second time limit in which to load 4 implements onto a platform the implements included a 90 KG shield to be picked up from the floor (a particularly nasty start), a 115 kg Keg, 120 kg Sand bag and Finally a 140 kg Keg, all implements had to be loaded onto the platform with the Kegs upright for the timing to stop.  Again the head to head nature of the event gave it more things for the crowd to shout about.  In an exciting event Bug Stevie cherry showed that big men can move posting the wining time.
Winner – Cherry
Event 4 – Deadlift 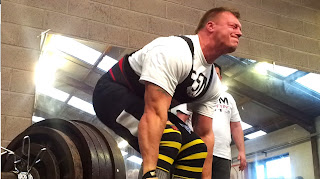 We moved back into the welcoming warmth of Burns Gym for event 4 for that quintessential strength display – the deadlift.  The rules where simple enough 2 bars where loaded with 280 kg and the athletes had 90 seconds in which to pull as many reps as they could.  After what in strongman terms can be described as a throughout warm up the athletes faced off in pairs.  By this time of the comp most of the lads would have been feeling pretty brittle and here is where there bodies would break against the rocks.  The eventual winner was John who pulled a storming 11 reps and looked good doing it fast and aggressive that is probably the most impressive display of strength I have seen in the flesh in quite some time.  In second place Nick and Luke had 8 reps.

Personal Favorite – Mark Hunter with my own personal bias of training with Mark he pulled 5 reps with a previous best of 2 reps to more than double your rep PB after 4 3 previous events shows guts! 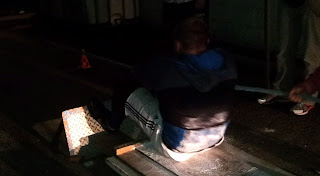 In the penultimate event athletes where given 90 seconds in which to pull a heavy 4 link chain 20 meters using nothing but a rope and their tired and battered bodies.  With the day drawing in and night approaching athletes and spectators alike where feeling the drain of a long day of grueling events.  Most people made hard work of the chain drag with only a handful of athletes actually completing the course.  Mark hunter finished the course in a good time of 30 seconds showing athleticism and strength but he couldn’t hold out Luke who was apparently reasonably unpracticed but proceeded to romp to victory using a combination of raw strength, power and fitness to complete the event. 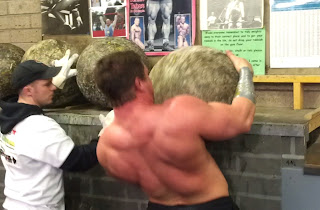 And to end a long day the classic and body breaking event of Atlas stones.  Athetes had 90 seconds in which to drag their beaten carcass through 6 stones.  110 – 140kg stones done to a 52″ platform, 160kg and 185kg stones done to lower heights.  Thankful to be back in the heat of the gym the crowd watched on enthused as the lads put together one last ditch effort to complete the stone run.  All 22 men had a go but only two had enough to finish all of the stones both Luke and Thomas showed great staying power to finish all of the stones and the crowd cheered them every step of the way.  Thomas Parke was the eventual winner making short work of all the stones.

Below you can see Luke finishing the stone run and the eventual winning Performance.

During what proved to be a very long day (rules were given at 11.45 and the last stone run was finished at 18:30) we seen a lot of new athletes really increase the standard of Scottish strongman.  There are a lot of young lads who with some more events practice under their belts could be a force to be reckoned with at National and International level competition.  The prospect of having another Scottish lad at WSM doesn’t seem too far fetched after yesterday’s comp.  Good day out and more importantly the grass roots of Scottish Strongman is growing stronger.