Have you ever wondered why when someone performs a rep of something it never really quite looks the same even when they are highly skilled at the exercise.  If you watch a world class level weightlifter performing a snatch or clean attempt there will almost always be slight differences in it’s execution even in made attempts at the exact same weight.  Even on a relatively simple exercise like squat form will change with in the same set and it will also change as more weight goes on the bar.

Below is a video taken from the 2012 USA weightlifting nationals in the front of the shot is an experienced lifter (Jared Enderton) performing the back squat and in the back of the same platform is a girl performing snatch.  Pay close attention to both for any deviation in the way they move in the same sets and different sets.

Notice how on Jared’s squats with the bar and 70kg his form stays almost identical however as the weight increases (220kg – 240kg) his velocity and hip placement varies much more from rep to rep even on a simple exercise like squats.  The girl in the background has variance almost every time she does a rep of something if it be pulls or snatches she puts the bars in a different position, catches in a different manner etc.

This shows that even a relative expert doing a relativity simple exercise like back squat still exhibits variance that represents a distribution.  In science the bell curve is used to describe a “normal” distribution around a mean.

For instance if you where to order the same 500g baugeutte from a bakery every day for a year and measured it’s weight you will find that it doesn’t always weight exactly 500g.  It may weight 450g one day or you might be lucky and catch the baker on a particularly ostentatious day and get a 550g loaf.

However if you where to plot a scatter graph you should see that the majority of the points congregate beside the 500g mark.  This represents a bell curve.

Another concept worth noting is regression to the mean.  When learning a skill there will be a massive amount of variance in the execution of your skill with the mean of your effort being a poor performance, whilst an advanced lifter will have less variance and the mean of their efforts might be good performance.  Below you can see a graph illustrating this point for three lifters of different skill levels. 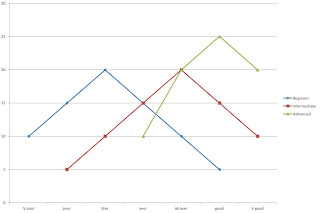 The peak represents the category where most of their lifts are rated the further right you can shift your average then the more skilled of a lifter you will become.  Regression to the mean states that even though you might get a luckily good result here or a really bad result there with enough attempts you will tend to revert back to your average performance.
This is pertinent for coaching feedback and is very well explained in this anecdote
The psychologist Daniel Kahneman, winner of the 2002 Nobel prize in economics, pointed out that regression to the mean might explain why rebukes can seem to improve performance, while praise seems to backfire.[8]
You almost always get good results from criticising a person for doing an unusually bad rep because they will regress to their mean skill level which will be better than which you have seen and vice-versa you will usually get bad results for praising an abnormally good rep since they will revert back to their normal skill level which will be worse.
It is through practice that you shift your hypothetical average to the right (thus making it better) and if psychology is to believed then you require 10,000 hours of practice to achieve skill mastery and anyone who has lifted weights will understand just how much of a task this is with in the context of weightlifting.
Things to remember when self coaching or coaching someone in the unique skill of lifting weights
That concludes our little foray into stats and coaching.
Marc
Previous Post
Next Post