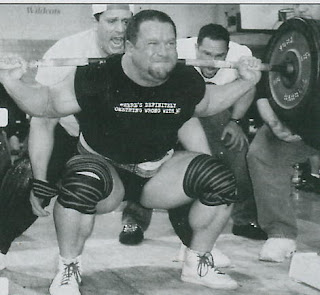 Here is some training footage taken from http://basbarbell.blogspot.com/
During the Squat video he lifts 247.5 kg, 307 kg and 339 kg.
During the bench press he lifts – 102.5 kg, 182.5 kg, 202.5kg and 220 kg.
During the deadlift he lifts – 22k kg, 265 kg and 307 kg.
Hope you enjoyed watching some videos from one of the best American lifters to ever grace a powerlifting platform and hopefully if gives you the fuel you need to squat harder.  Credit to all copyright owners.
Marc.
Previous Post
Next Post