Another month and another gloriously bound copy of the Journal of Strength and conditioning await perusal.  So with out further ado let’s pick out the best bits.

Kimitake Sato et al of  Arizona State University performed a kinematic analysis of the back squat using 25 participants (20 male and 5 female).  The two conditions consisted of a back squat performed using trainers and weightlifting shoes.  Participants used 60% of their 1 RM back squat.

Using side video 2D analysis they determined that the only significant difference was less trunk lean in the weightlifting shoe group.  Upright squatting was determined to be desirable due to less sheer forces being placed on the lumbar spine.  So if you haven’t already bought some shinny new weightlifting shoes here is an excuse.

The Effectiveness of Resisted Movement on Sprinting and Jumping performance a Review.

Con Hrysomallis of Victoria University, Australia presented a review of 26 journals between 1970 and 2010 on the effects of weighted training (i.e. performing the action with external load) on both sprinting and jump training.

Eccentrically loaded jump training where the resistance is released when the concentric phase is introduced had been shown to be more effective than non loaded jump training.  An example of a drill would be to have the athlete perform a depth jump with dumbbells in hand when the athlete makes contact with the floor have them drop the dumbbells and jump as high as they can.

Urs Granacher and Ablert Gollhofer at the University of Freiburg, Germany looked at the relationship between Strength (isometric and dynamic), Power output (vertical jump height and power output) and Postural Control (static and dynamic) in thirty healthy per-pubescent school children.

Using these observations they tried to establish any relationships using a pearson’s cor-relation test.  They failed to find any relationship between any conditions other than a moderate co-relation between planter flexor (calf muscle) rate of force development and jump height.

Perhaps more interestingly they failed to find a relationship between static and dynamic postural control conditions inferring that these are discreet skill sets and need to be treated as such in training.  It is not surprising that strength was not co-related with postural control since strength is a gross motor action requiring maximal effort (and such recruitment of the whole muscle) which is diametrically opposite to balance which requires fine motor actions which require fine motor recruitment (firing the right neurons at the correct time).

Using the Wii Fit Balance Board to Improve Lower Limb Weight Distribution in the Squat
exercise.

Rian McGouth et al of the University of Melbourne, Australia performed a novel study the likes of which don’t pop their head into sport science research anywhere near enough.  They used the Wii fit balance board to asses the amount of weight bearing asymmetry was present in participants during the squat exercise.  After baseline measurements they then used custom software to provide visual feedback to the user in an attempt to try and correct any imbalance between legs.

Initially both groups showed some asymmetry in their weight placement with the trained groups displaying much less asymmetry than the untrained group.  During the real time visual feedback intervention only the untrained population showed a significant improvement.

The authors suggest that the use of visual feedback could be an inexpensive way of improving weight distribution in lower body exercises in populations that have high levels of variance (such as post lower body surgery patients).  It also shows that regular bilateral strength can have a similar effect.

The effect of Volume on lower body strength.
In a study that has already received some attention in the weight training online community Daniel Robbins et al of the University of Auckland, New Zeland conducted a 10 week training study looking at the effects of training volume on 1RM back squat strength.
In a study that was commendably well controlled for a sports science study, 43 young male subjects who had at least 2 years of previous free weight’s experience and at least a year of no lower body injuries where entered into the study, a minimum strength requirement of 1.3x BW squat was also required before entrance into the trial. 32 of the original entrants finished the 10 weeks of training.
Subjects where assigned to three groups one set, four set and eight set group.  After a 2 week standardisation phase the groups engaged in the 6 week training phase where they performed 80% of their 1RM for as many reps as possible for the prescribed number of sets.  After the 6 weeks of volume training they engaged in a 4 week period of standardised training where they engaged in prescribed training loads based off new 1RMS.
1 RM testing was carried out at weeks 0 weeks – 3 weeks – 6 weeks and 10 weeks respectively some the results of which can be seen below. 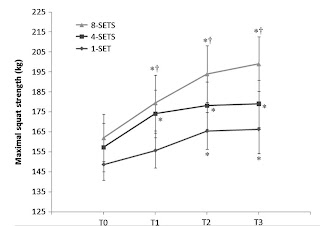 Some point of consideration all reps where performed at 90 degrees at the knee and as such where half squats which could make inferring from this to a routine involving full squats difficult.  However it would appear that more is better when it comes to getting stronger in a shorter period of time.
Anyone who has seen someone do a specalisation routine like smolov can attest to this.  However caution must be taken when trying to extrapolate this into a longitudinal training year too much time spent on chasing one lift could lead to over use of injury if care isn’t taken.
It does however offer some quantifiable support to specialisation periods over shorter durations for lifter who wise to bring up a lagging lifts.  Also note that with in groups the person to person variation was high in their response and after 6 weeks the 4 SET and 1 SET condition offered a similar gain in strength it was only at the 3 week mark that 4 SET group realised much faster gains.
The 8 SET group continued to gain strength even during the 4 week standisation phase it could be that for sustained gains volume load must remain at higher levels.
Perhaps training where short peroids of volume load being very high (say 2-3 weeks) followed by a 1 SET period may be an efficient method of implementing this into a sustainable programme.
That concludes our January look at the JSCR.
Marc.
Previous Post
Next Post