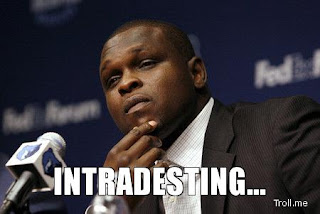 Over the course of this article (and possibly over the course of a regular installment) I will be looking at the current Issue of the JSCR (Journal of Strength and Conditioning Research) and choosing 3 or 4 articles of interest to discuss in brief.

Parchmann and McBride of Appalachian State University looked at the Relationship between the functional movement screen and athletic performance.  They looked at 25 golfers (15 male and 10 female) and tried to ascertain if scores on the FMS or 1RM in the back squat had any relationship on athletic measures namely – 10 and 20m sprint times, vertical jump, t-test times and club head velocity.  In a telling acid test of “functional training” and prehabilitation the authors relayed the following

I consider this as reinforcing the obvious as their are clean links of causality between gross lower body force production and it’s affects on expression’s of force when related to other specific tasks.  However where the links of causality are far more tenuous (improving your score on a made up test) you are decreasing your effectiveness.  Again I would like to use this opportunity to stress that strength and conditioning is solely the process of stressing and increasing physical capacities and not about creating complication where non exist and ultimately chasing pot of gold at the other end of the functional rainbow. 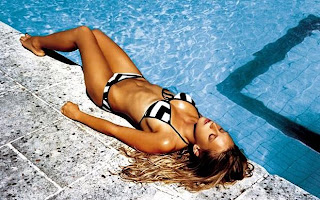 Swim Suits with a difference

O’Conner and Vozenilek of Northwestern University in Chicago looked at the unique topic of the effects of swim suits on world record times between 1990-2010.  This is a topic unique to a couple of sports where garments can have a large artificial effect on sports performance (power lifting being an obvious co-example).  The following graphic does a very good job of illustrating their findings (click on the picture to get a bigger version). 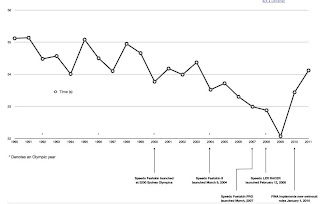 As you can see from the introduction of the suits times come down at a rapid rate and from their exclusion they take a steep climb up again.  The authors suggest that the inclusion of  swimming suits increased performance far in excess of what can be explained through genuine natural talent or the improvement of training science.

Possibly an example where “real” science like material science, fluid dynamics and other disciplines with directly linked causality get involved in the process of sport where they produce rapid and sustained gains in performance to the point where it’s deemed unfair.

In conclusion [La–] and HR are lower when wearing CGs during active recovery after a bout of high-intensity treadmill running compared with when wearing regular running shorts. This is thought to be because of CGs assisting the muscle pump associated with active recovery and enhancing blood flow and venous return. The RER values measured during the 10 km·h-1 and 85% [latin capital V with dot above]O2max treadmill run were higher in participants wearing CGs compared with when wearing running shorts, suggesting a greater release of CO2 from the buffering of lactate while wearing CGs.

This study would lend some quantifiable evidence in support of wearing these garments for athletes or individuals involved in high intensity activities that work on an intermittent basis.  Although it may prove wise to have make athletes wear some shorts as well.

Randell et al of AUT University in Auckland, New Zeland looked at the reliability of performance velocity of the jump squat under feesback and nonfeedback conditions.  Using 20 participants randomly assigned into either the feedback or non feedback condition they performed 3 jumps squat sessions.  During each session the velocity of each rep was measured using a linear position transistor (which measures the vertical displacement and velocity of a bar) were used to measure the velocity of every rep.

Using these measurements the authors tried to quantify the reliability or consistency of performance in both conditions.  They found an increased reliability and less deviation around the mean in favor of the feedback situation 0.07 vs. 0.13 m·s respectively.

They suggest that there is a 50/50 chance that feedback is positively involved in increasing a more consistent performance.  The other 50% chace is it involves a trivial improvement with almost no chance of negative influence.

In light of these findings it would seem prudent to provide some kind of velocity based feedback for exercises that demand a high velocity (jump squats being a prime example) where it is available.

That concludes our cherry picking on the JSCR till next month.