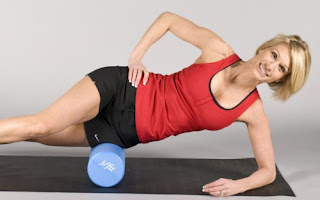 Condition one – Control – no intervention just taking part in testing at the same time intervals. 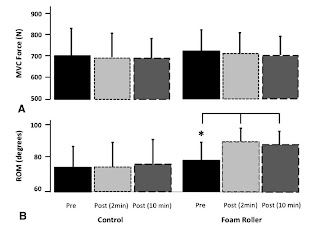 Although anecdotally foam rolling had been advocated for the best part of 7 years, it is nice to see some data appearing the literature to quantify it’s affects at it as an intervention.  Whilst not iron clad proof that foam rolling is the be all and end all of pre-workout stretching it would appear according to the data provided in the JSCR that foam rolling may be a much better pre lifting warm up than either static stretching or PNF as it produces a similar if not greater gain in ROM (at the knee joint anyway!) with out the associated decrease in force production (in an isokentic dynometer test…). 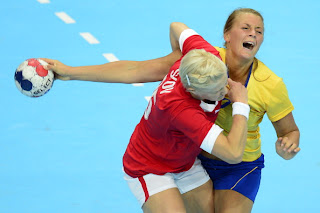 Differences between Physical Fitness and Throwing Velocities of National and International Female Handball Players.
Cristina Grandos et al of the University of the Basque County, Vitoria-Gasteiz, Spain.  In an interesting and novel study design they looked at the same Handball team in 2003 (n=16, age = 23.5 +/- 4 ) when they were at a national level of competition and then later in 2009 when they had reached an international level (n=14, age=27 +/- 3) only three of the players had remained in the squad from the same 2003 team.
When comparing the two teams physically the international players showed higher levels of –
Surprisingly enough they failed to show a significant difference in the following physical characteristics. 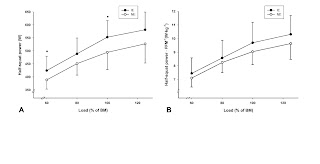 This is a very interesting study design as it allows people to look at a case study with in a specific sport much like the rugby union study covered last year that looked at the physical differences between School, Academy, Semi-Pro and Pro players it lets us look at some of the physical differences between different levels of the sport.
A study like this might help you make a case to some female athletes who maybe do not see the use of strength and conditioning for their sport.  You can show them a case study were power and strength (best developed in the gym) made the difference between the International and National calibre players where more “sports specific” measures showed little to no change. 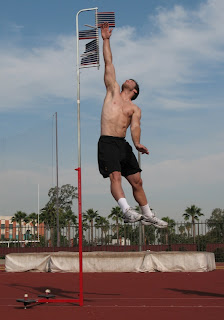 The Relationship between Jumping Ability and Running Performance over varying distance.
Brandon Hudgins et al of Appalachian state university, North Carolina looked at the co-relation of a three jump test (how far an athlete can jump in 3 jumps using two legs) on the running times of 33 athletes (10 sprinters, 11 middle distance runners and 12 long distance runners).
They co-related performance in the 3 jump test with performances over three different distances for each athlete sub group.  They showed as might be expected a stronger co-relation for jump performance and short sprint times (60, 100 and 200 m) but still showed significant relationships between jump performance and middle and long distance events. 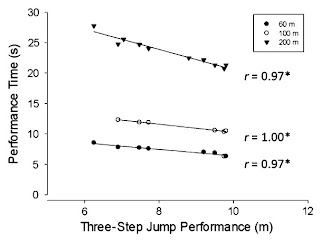 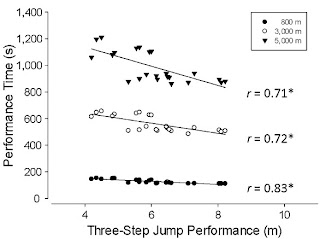 Although the population sizes and specificity of this study are pretty good by the standards of strength and conditioning research the use of co-relation as a statistical measure can’t really go unchallenged.  Whilst the strength of the relationships are fairly compelling on the face of them co-relation is descriptive data at best and cannot decipher causation (especially in populations of 10 people).

This study might form as an interesting note as to the relationship of jump performance and middle/long distance events but it doesn’t really tell us anything from a scientific point of view. 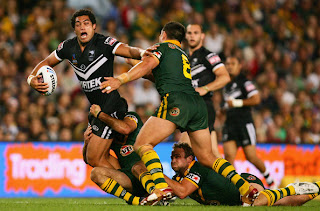 Physiological responses to an intensified period of Rugby League competition
Rich D. Johnston et al from a variety of universities from the UK (Edinburgh, Glasgow and Chesire) and Australia (Brisbane) looked at the effect of 3 80 minute ruby league games in a 5 day period on physiological markers in 7 rugby league players taking part in an international student tournament.
The authors looked at Plyometric push up and counter movement jump to assess peak power and peak force along side blood creatine kinase (or CK is a marker of muscle or tissue damage) and perceptions of well being determined by a questionnaire.  These markers where collected every morning for 5 days and 2 hours post match.
Researchers also used GPS to look at high running speed running and maximal accelerations  and took a not of successful tackles during games.
Players showed meaningful decreases in both measures of neurological performance (plyometric push up ES = -0.53, CMJ ES = -0.73) they showed decreased sense of well being (ES = -1.56) and increased levels of blood CK (ES = 2.32).
Players also showed a drop in match performance reducing distances covered by high speed running (ES = -1.49) and maximal accelerations (ES = -0.85) as well as a reduction in the percentage of successful tackles (ES = -0.59).

As would probably be expected 3 games of a high intensity contact sport such as rugby league shoes increasing levels of fatigue and decrements of performance in players getting less than 48 hour of rest between games.  Given the increasingly hectic schedule of professional sports (especially in contact sports) it may prove prudent to monitor the performance and well being of players using simple unintuitive measures such as pylometric pushup, CMJ and well being questionnaires to measure an athlete’s state of readiness on a daily basis (compared against base line).
These measures might only be feasible or valid in a professional or high level sport or maybe during periods of dense competition but it is definitely and avenue that could be further developed and may have implications for the dictating of training loads given to players in competition phases by strength and conditioning coaches.  Allowing them to be pro-active in individualising programmes and making the most of times when players are fresh and allowing for more rest when needed.. 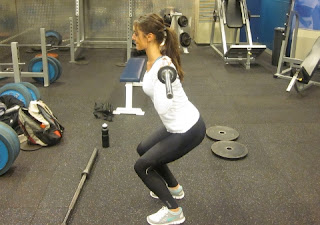 Post Activation Potentiation (PAP) – A Meta Analysis
Jacob M Wilson was lead author on a study that had a cohort of authors from the United States, Spain and Brazil.  They performed a meta-analysis of the current literature to try and get the optimal protocols for PAP for the following variables.
PAP refers to the observed ability of trained individuals to create greater acute power outputs after engaging in a high intensity and bio mechanically similar conditioning activity.  And example of which follow:
3 Reps of 1/4 squats with 150% of 1 RM back squat -> 5 minutes of rest -> performance of counter movement jumps 5 reps.
After their literature research the authors included a total of 32 studies which resulted in a pool of 141 subjects (an average of 4.4 subjects per study…..) the studies had to be controlled and randomised as to be of sufficient quality to be included in the Analysis.
So what did this meta analysis tell us when it comes to optimising our use of PAP in sports conditioning? 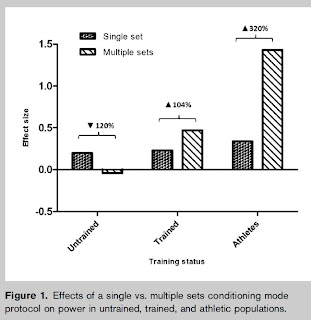 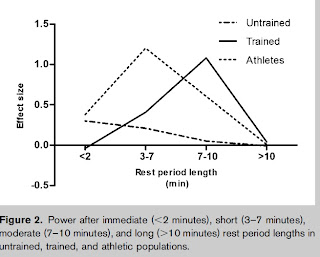 So that’s what the rare beast a sport science meta-analysis has to say on the subject I don’t want to be disparaging because it’s good to see people implementing systematic or statistical based literature reviews to pool together the studies we have on a subject and try to produce some more co-hereat or powerful science.
So to surmise to get the best acute response out of your PAP training protocols you should do the following.

Lets produce a practical example of an athlete to show how you might take this information and put it into practice in the real world.  I will lay out parameters then put that into an “optimal” PAP session.

Warm up as normal
Exercise Superset (A1)

What you might have here is a session you could use during an important competition  phase where the athletes ability to perform their sport is paramount to their development as an athlete in the long term.  It could also maybe an auxiliary 3rd or 4th session where you are trying to work solely on power output.  Sometimes it’s nice to take some research that is of better quality and put it into a practical context so you can see how you might make the jump from Research paper to what you might do in a session for an athlete.
That concludes our look at March’s edition.  See you in April!
Marc.
Previous Post
Next Post