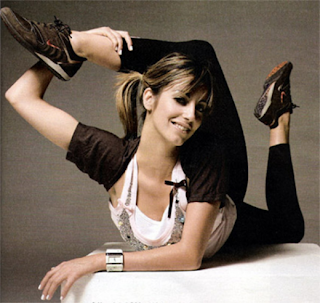 Yutetsu et al of the University of East Asia, Yamaguchi Japan looked at the effects of proprioceptive neuromuscular facilitated  (PNF) stretching and static stretching on maximal voluntary contraction (MVC).  The research involved 13 males subjects who completed 3 random conditions – Static Streching, PNF stretching and control (no stretching).  After each condition 5 minuites of rest was allowed then Range of motion at the Hip was measure and subjects completed a maximal knee isometric (static) extension test where surface EMG was measured.
They found that PNF stretching significantly increased range of motion in the hamstrings over static stretching and control conditions.  Both stretching conditions reduced maximal voluntary contraction of the knee extensors but not significantly more so than the other (6.9% force reduction for static stretching and a 7.1% reduction for PNF stretching).
This study adds to a growing body of evidence to show that some of the adaptation that leads to increased flexibility in muscles is party due to decreased levels of strength.  This has not been shown to be chronically or with a significant amount of weight that strength or power athletes might want to be wary of stretching but you might want to put your static or PNF stretching to the end of your sessions.
Variation and Adherence to Exercise
Juvancic-Heltzel et al of the University of Akron in Ohio, USA looked at the effect that variety of choice had on the Rates of Perceived Exertion (RPE) and adherence had on a cross sectional population of children, young adults and older adults each group had 6 males and 6 females all subjects came from a sedentary background.  Participants where then put into either a low variety situation (2 resistance machines) or a high variety situation (10 resistance machines.) both conditions lasted for 20 minutes. 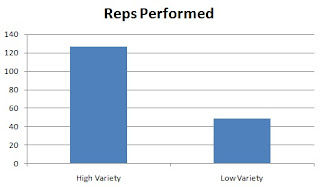 Participants performed significantly more reps in the High variety situation, increased the amount of time allocated to exercise and expressed a greater liking for the high variety situation.  No significant diffrence was recorded between low and high variety conditions for RPE.
So it would appear if you want to keep your clients or training partners more engaged at least at the start of their training career then more variety is a good idea. 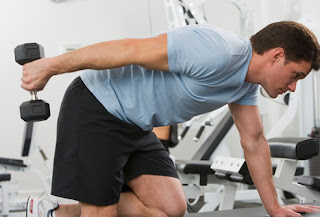 Effects of Training volume on strength and hypertrophy in young men.
Sooneste et al of Juntendo University, Inzai City, Japan looked at the effects of training volume on both muscle hypertrophy and muscular strength.  They recruited 8 healthy young men with minimal previous experience of weights training.  The researchers used a novel cross over design where they randomly assigned one each of the participants arms to the high volume condition (3 sets) and the low volume condition (1 set).
Each participant took part in 2 sessions a week over 12 weeks where they trained their biceps muscles using a single arm dumbbell preacher curl with 80% of their 1 RM performed to failure.  They performed three sets with one arm and one set with the other arm.  The design was to try and novelty control for confounding factors such as nutritional state and genetic differences. 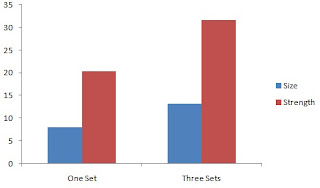 They showed that the higher volume condition was better for both hypertrophy (1 set produced – 8% increase in bicep size and 3 sets produced – 13.3% gain in biceps size) and for strength (1 set – 20.4% increase in 1RM and 3 sets 31.7% increase in 1RM).
Although the small size of this study as is usually the case in this realm of social science severely limits the varsity of these findings the novel design goes to show that in spite of nutrition and genetics higher volume programmes are better for beginners who wish to gain both size and strength.

The effects of three models of perodisation on the strength and power training in trained individuals.
Loturco et al of Pablo de Olavide University, Seville, Spain; looked at the effects three distinct training structures (often referred to as perodiation) had on the performance of 60 male volunteers in three conditions – heavy resistance training, jump squat and counter movement jump exercise.  They where split into four groups with each group containing 15 participants.  Control group, Successive Mesocycle group, Successive week group and simultaneous daily group.  Their training was organised as such.

Over the 9 week period each of the groups engaged in their relevant training activities all volume load was equalised amongst the training groups to try and obviate for any confounding variables.
They measure 1 RM back squat, 20 meter sprint time, Jump height and mean/peak power in a jump squat.  All experimental groups experienced improvements in all of the measures without any group showing a significant improvement over the other in any of the measures.
This study has immensely interesting implications for the organisation of training whilst it alone does not represent a damning report of the precived need to organise training into blocks or phases it does shed light on it as a paradigm.
This study shows that as long as the correct amounts of training stimulus are being performed and to a similar volume, the when and where of how they occur in the training life of the athlete is irellavent.  All stimulus may be trained concurrently without the need to drop one completely from the programme entirely.
The emphasis of training may potentially be influenced by increasing or decreasing the volume of specific work done over a period of time however this remains to be demonstrated concretely.
This study just highlights the fact that although great amounts of planning and attention is paid to organising training both by athletes and strength and conditioning coaches the actual evidence we have for it’s underlying mechanisms and it’s actual importance remains very weak. 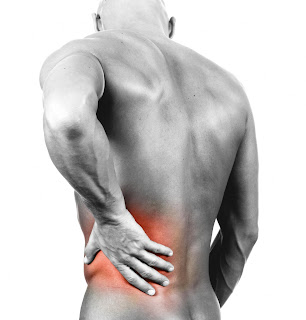 The effects of specific resistance training on muscular pain symptoms – Dose-Response relationship
Pedersen et al of the University of Copenhagen, Denmark looked at the effect of dose response of specific strength training and the reliving of lower back pain.  Specific strength training for the neck and shoulders had been previously shown to decrease pain symptoms of the upper body and lower back.  The designers of this study wanted to explore the amount of training and how it effected the pain relief to effectively see if more or less was better.
549 participants (397 women and 219 men) ended up participating in the study after being whittled down from an initial cohort of 2,163 office employees.  They where assigned to one of three conditions – specific exercise (SE), All body general physical exercise (APE) and control (REF).  After the intervention Specific exercise showed a greater reduction than general with control being the least effective. 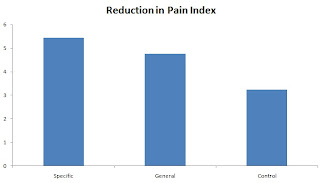 The researchers then further scrutinised for the actual amount of volume accumulated by participants and correlated against for reductions in pain.  They found a negative correlation between volume of training and changes in pain index showing that larger training volumes lead to a decrease in pain symptoms.
It would appear when performing rehabilitation exercises for lower back pain more is better, similar studies could be formed on dose response to a variety of rehabilitation exercises to establish best practices.
That concludes our look through January’s research I am going to try and make this article series a monthly addition in 2013, so with any luck I will see you in February for some more interesting snippets.