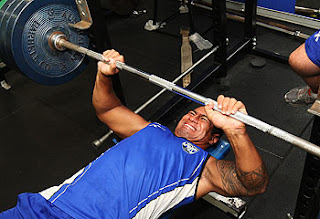 Daniel Baker of Edith Coan University in Joondulup, Western Austrailia used 1RM bench press and mean maximum power during bench press throws of various weight (40kg to 80kg) to assess the changes in upper body maximal strength and power in 6 professional players over a 10 year period.  The players showed a fairly large increase in power over the 10 year period (22-23% increase) however the majority of these changes came in the first 4 years of training.

The author did note in his discussion that high volumes of strength-endurance work negatively effected their strength gains and may not be a sound programming stratagem in strength and power athletes with 4-7 years of strength training experience.  The strong relationship between maximal strength and power was also noted suggesting that a marked increase in top end strength resulted in improved power outputs.

The author suggested that a strength/power ceiling might exist for athletes who have been engaged in strength and power training for 4 years however he did indicate that with appropriate training variation gains can still be made also if strength and power can be maintained then this might be okay as athletes could spend more time becoming better sports people.

No changes in force or power out put in variations of the power clean in inexperienced female athletes.

Comfort eat al of the University of Salford in Machester England looked at the changes in peak force (PF), peak power output (PP) and peak rate of force development (RFD) in 16 novice female athletes with a average 1 RM power clean of 82% body weight.

The researches looked at mid thigh clean, hang clean (knee) and powerclean taken from thee floor at 60, 70 and 80% of 1RM.  The athletes performed 3 reps of each condition at these percentages and an average value was taken for PF, PP and RFD. 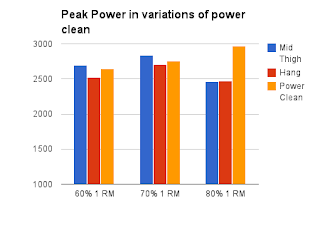 The researches reported no difference in any of the measures taken and recommend that a variety of clean positions be used in the training of novice female athletes and suggest that working at 60% of 1RM could be optimal for the development of technique as it didn’t show any difference in kinetic measures but would allow for a greater level of consistent practice. 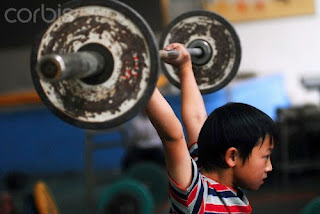 They were further divided into two groups during the period of the study Strength training group (ST) who perform sports training and additional strength sessions and control group (CG) who only engaged in sports training.

The researchers also looked at 105 elite youth weightlifters to get a reference point for what top level strength performance could be for the various age groups. 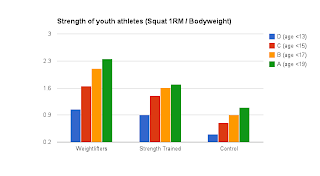 They showed that after 2 years of strength training that the athletes could manage a marked increase in strength when compared against the control group as demonstrated in the graph above.  The high levels of strength exhibited by the weightlifters also showed that adolescents have a large capacity for strength gains. 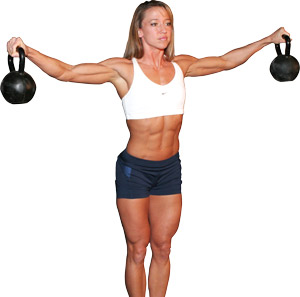 Transfer of kettle bell training into other activities after 10 weeks training in novices.

Once measurements where collected the experimental group took part in a 10 week peroidised total body routine using kettlebells whilst the control group did nothing.  After the 10 weeks elapsed a second bout of testing occurred in the same tests.

The kettlebell group significantly improved in both 1RM bench press (+15 kg on average) and on clean and jerk (+5kg on average) and the control group did not significantly improve on either.  No significant improvement was found for either muscular endurance test or for counter movement jump.  The author then spends the discussion section extolling the possible benefits of kettle bell training as an alternative to traditional equipment.

This study is very weak for a number of reasons firstly the groups where not evenly split (23 in experiment and 14 in control) it would appear that they were split according to their base line levels with weaker subjects being put into the experimental group as shown by their baseline measures (control where 15kg stronger on bench press on average at baseline) one would not expect to see such a difference had subjects been assigned randomly and evenly.

The fact that participants on managed very moderate increases in low levels of strength over a 10 week period and didn’t manage to improve significantly in either general measures (strength endurance and power) would suggest that kettlebell training is a very weak modality for the training of strength and power.

They however increase general levels of strength in weak and untrained populations so could be of use as a general strength training tool for this population. 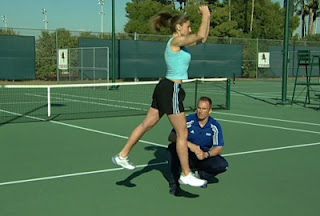 They showed that for all of the subjects the optimal load for watt output was 0% load and that with every 10 kg of external load added a significant decrease in watt output was shown.  This was attributed to the drop in velocity when external weight was added.

The authors noted that to maximise power training no external load needed to be used during jump training however they noted that for sports where players must express power against an external load (forwards in rugby) it might still prove useful to perform power training against load.  For players who’s main activities are expressions of their own bodyweight (sprinting, jumping etc.) unloaded jump training should be optimal.

It would be my inference that given the current consensus that unloaded jump training being superior for power output that athletes should only need to engage in unloaded plyometrics/jump training and a good strength programme to get the majority of the benefit out of their strength and power training.

That concludes February’s edition see you in March.