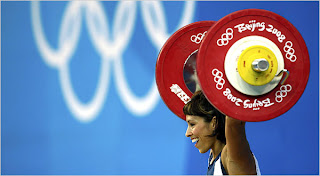 It is a widely held belief amongst many that the current generation of weightlifters are not as good as those of decades past. This may be true in some weight classes (super heavies being the big stand out), but it would appear overall the level (at least at the very top) is pretty much the same.

It would appear that the supposed gap between the older generation of lifters and the current does not present itself when you look at the data for all weight classes. However a more qualitative approach displays a different story.

Using the Sinclair scoring system we can see a clear trend favouring the older records this may be due to a larger time frame allowing for more outstanding lifters to show them selves in each weight class.

Using a line graph we can see the spread much better and it would appear (minus a few examples) pre 1992 lifters performed better than 1993-1997 or the current generation. This may be down to more lax drug testing amongst a myriad other factors.

On the whole it would appear that as a gross measure current lifters are not performing at a lower standard than previous generations however a more qualitative approach to the data reveals that weightlifters of previous generations may have performed at a higher level when body-mass is accounted for.

More detailed looks at European and other records could reveal a fuller picture.

Hopefully this article has helped to put forward some data on a topic that is very much of interest to many lifters/coaches.