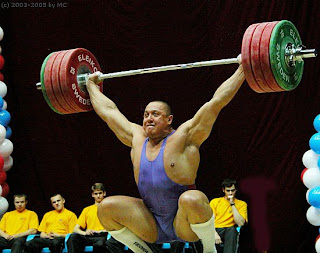 The original Post was put up on the Sugden barbell forum by member kirkynick an author and strength sports enthusiast who is has been living in Russia for the past 6 years.

I watched a press conference the other day dated 18/04/2012 called Preparations of the Russian weightlifting team for the 2012 Olympics.

One journalist asked the panel, which included, among others, the president of the RWF Sergey Syrtsov and the men’s head trainer David Rigert, about Mikhail Koklyaev and his part (or lack of) in the Russian team. I have written this part of the press conference out fully below.

The full press conference can be seen here (in Russian). And the part about Koklyaev lasts from 33.14-41.25

Note: when reading this, remember that it’s spoken speech, so may sound a little strange written down. And remember they were talking among people who know the context of what was being said. Also, the words within brackets are my additions, to help make things a little more understandable.

And, by the way, the Russian team will be announced after the 11th June.

Journalist: “This question, I guess, is for Syrtsov or Rigert. Koklyaev Mikhail, the rumours were, the information was, that he had returned from strongman to weightlifting. Will he take part in the (Russian) championships in Saransk? This is the first question. And the second. On TV slipped out a little, just a few seconds, of ‘information’ that the Federation had summarised the results for the year and had named the best athletes, but this information was so secret, that out of all my acquaintances, and I have many, no one had even heard about this. Could you please tell me, how do match the desire to promote the sport with such classified information? Thank you.”

Syrtsov:“So, come on, we’ll start with the first question. The one which refers to the strongman, Koklayev Mikhail. Yes, indeed, he competed. And achieved very good results in strongman. In my opinion, he was even in the top, second, or third. Now, with regard to weightlifting – here sits the head coach (meaning Rigert). And he more than once made the the suggestion to Mikhail Koklyaev to start weightlifting again, to which he (Koklyaev) basically said that it’s better if he competes in this..uh.. how to correctly call it.. ‘the show-programme’ (meaning strongman).”

Syrtsov: “And, thanks to Turchinsky (famous strongman promoter and and tv presenter in Russia), he went there and competed, and when, unfortunately, Turchinsky was no longer (he died), Mikhail Koklyaev tried to return. Yes, he returned, and even competed in the Cup of Russia. Became the champion. But the data which the Federation has, which in the past, people have written about a lot, maybe correctly, that he’s a tenfold champion of Russia, but he is not chosen to compete anywhere, well, I’ll tell you that he was taken many times (to compete), he travelled to international events, the European championships, the worlds, and even as a junior. And even he, in his time, when the famous Rezazadeh (was competing), they competed with each other at the same age, in the same weight category at the junior world championship. And Koklyaev once beat him. But after this, Koklyaev remained Koklyaev, and Rezazadeh, nevertheless, became the Olympic champion, became the world record holder. And when sending Koklyaev already (to compete), when he had become fully adult, so we received, rather Russia received the kilograms (the result), which gave him (Koklyaev) the opportunity to fight for 6th to 8th place. Here you need to ask yourself, make certain conclusions. Is it worth taking such an athlete?

Member of audience: (asks a question without a microphone, so it’s not really understandable, but it was something like): “But what about the weights he (Koklyaev) has put up here in Russia?”

Rigert: “It’s inside, it’s home, these are different thing entirely.” (meaning that setting a record and lifting such weights inside Russia is one thing, but doing them abroad in international competition is another)

Syrtsov:“As I just told you, when he (Koklyaev) was taken (to compete) – we received absolutely different kilograms (results).” (meaning he didn’t perform like he did in Russia)

Rigert: “I personally took him three times. And the best achievement, was when he lost 27 kilograms, and 30, and more. Not of his own bodyweight, but from his result (total lifted). So. Therefore, I have nothing against him. I know him well. He even took his wife from Taganrog from me. My worker was, Oksana (Koklyaev’s wife, Oksana, used to work for Rigert. He met her and then she stopped working for Rigert).”

Syrtsov: “But you had already talked with him.”

Rigert: “Yes, last year before the championship in Penza. He came to prepare. I said, ‘Misha, come at the expense of the federation, I can, because it’s necessary to get a list together, because I can’t (get a list together without getting people together). I need to show that it’s going through a strainer (the selection process). There is, thank God, in the state protocol, where it is written, when I can call a person to a training session, when I cannot. So, he stayed 2 weeks with the team and performed. Then he just simply left. His performance in Penza, at last year’s Russian championships in the summer, was nothing (he didn’t make a total). That… and the fact that, although, he 8 times became the champion of Russia, never once were his main rivals on the platform. Everyone was preparing for some kind of competition and were the obvious leaders, but these results of 210-250, this was in Nevinnomyssk and etc., they are not listed those kilograms (those lifts/results), if you look very carefully.”

Syrtsov: “Koklyaev, after the Cup of Russia, was included in the structure.”

Rigert: “And he is now, a part of the team, as a candidate.”

Syrtsov: “Yesterday we received a letter that said there is no such recipient living there (meaning Koklyaev does not live at that address any longer). The person has moved. We, when there is either a ranking tournament or a championship of Russia, get everyone with their passport to write down their address, just in case. And so, to that address, we sent the letters, relating to Koklyaev, to join the team and to invite him to prepare for some competitions. But, unfortunately, all the letters came back yesterday saying that the addressee does not live at the address. Please, another question.”

Rigert: “But lets continue on this same subject, in order to make things completely clear. There is, as a rule, I will decipher it… now all athletes, those sitting here and those who are not here, the candidates in the team and those who are vying for a place in international events, they all sit in the so-called Adams system. I will explain what this is. On a daily basis the international federation and WADA, need to know where an athlete is, the margin of error can only be one hour. Now, Mikhail was explained this, that he must undergo a medical examination (presume doping test). I don’t have the power to take any person into the team or structure, if they haven’t passed a medical examination (doping test). You know a lot of cases, and now it is very strictly controlled. He did not come (to take the test). To take a doping test before being invited into the team. Because we are constantly being monitored by the international federation. And two failures, accidental or not, no one cares, our team is expelled from the Olympic movement. That’s two! And, so, to register in the Adams System. For this, I explained it (in person) to him (Koklyaev), and official letters from the Federation were sent and his superiors (trainers etc) were notified, and he himself about the fact that these letters were sent, etc. And after 3 months, the reply comes, that the recipient does not live there. Well, no… But what , we wouldn’t like to have a strong athlete in the team? Really strong, not just for internal use.” (Rigert was saying, that of course they would like a really strong athlete like Koklyaev in the team, but not one that can only compete in Russia).

The thread and discussion can be viewed here